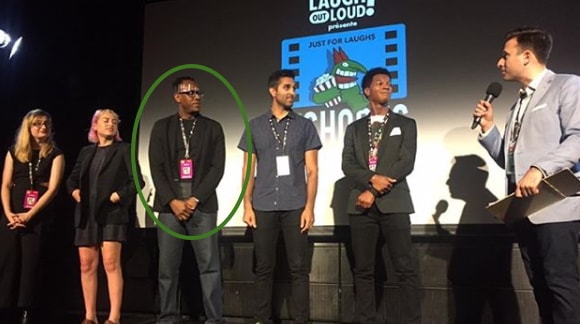 A total of 654 films were submitted for the short films competition.

A jury made up of Kevin Hart’s comedy outfit, Laugh Out Loud; Lionsgate, and Just For Laughs team picked the best 10.  Still, Pascal Atuma’s Sweet Revenge made the top 10m list.

The best 10 were then put to the public to pick the top 5 through voting on Laugh Out Loud’s YouTube channel. When the top 5 emerged from public voting, the jury then decided the winner.

According to Thai Randolph, Kevin Hart’s business operations manager, “it was a very tight race that came to the wire and they all agreed that ‘Sweet Revenge’ is the winner for the Kevin Hart’s Laugh Out Loud/Just For Laughs ‘Eat My Shorts’ 2018”. Speaking on the creation of ‘Sweet Revenge’, Atuma said: “I wanted a multicultural story that will be funny based on situations and close to the immigrant experience. I wanted a universal story.

“My itch to make world-class movie that will be funny and at the same educative of different cultures and people inspired me.” He gives thanks to his high school (Government College Umuahia, Abia State ) teacher Mr. Nwariaku , who was his English teacher and School Debating society Supervisor for predicting this day and instilling the confidence to strive for excellence and believe in ourselves to his classmates (Class of 83) and himself. He says “I am very grateful to him and I hope he sees this”