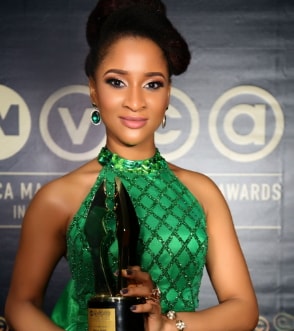 Banky W’s wife, Adesua Etomi is a multi-talented actress who holds her own in Nollywood. Born in Owerri, Imo State, Nigeria, the star’s love for the stage started as early as age 7.

Fast-forward a few years and a move to the UK, where Etomi graduated with a diploma in musical theatre and the performing arts, and began her rise to fame.

Her big-screen debut was in 2014 in Knocking on Heaven’s Door. She has since featured in Falling, A Soldier’s Story, Ayamma and The Wedding Party.

In The Wedding Party, a 2016 movie, she stars next to her husband, Nigerian singer, rapper and actor Banky W.

The 30-year-old’s television credits include MTV Shuga, which saw the rise of such talents as Oscar winner Lupita Nyong’o.

She, like many other actresses, has her eyes set on winning an Oscar one day.

“I believe in dreaming big, and I believe it’s something that is very possible. I have to keep working hard; my mandate hasn’t changed. Work hard and do the best I possibly can on every single job. An award is icing on the cake, not the cake itself,” she said in an interview with Nigerian talk show Rubbin’ Mind.

“New talent doesn’t displace old talent. We need to get to the point where we realise that we are a team.

“Nollywood is so big, there are so many opportunities,” she said, talking about how performers can collaborate with each other.

“Talent is talent, and when you see a mix of old Nollywood and new Nollywood, there is something so beautiful and organic about it,” she said.

She already has a number of awards to her name, including best new actress at the 2014 Nollywood Reinvented Awards, discovery of the year at the 2015 Golden Movie Awards, actress of the year – big screen at the 2015 ELOY awards and best actress in a drama (movie/TV series) at the 2016 Africa Magic Viewers Choice Awards.

In order to keep her momentum going, Etomi relies on researching all her characters for the projects she takes on.

“I’m not a method actor as long as your choices are true and your audience can connect to it,” she said, giving advice to rising artists in Nigeria.

She’s definitely one to look out for in the global space of entertainment. Remember the name Adesua Etomi.