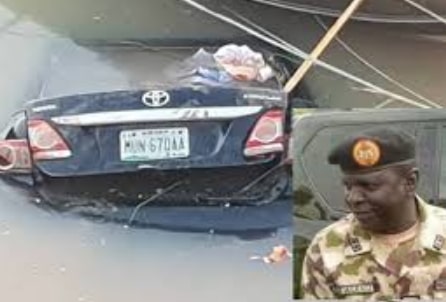 After 8 days of intense search that involved evacuating water, the Nigeria Army on Saturday found the car of missing retired Maj. Gen. Idris Alkali in a pond located at Dura, Du District in Jos.

The car, with registration number MUN-670-AA Kwara State, was pulled out of the pond at about 7 p.m.

The Army was assisted in the search and rescue operation by men of the Fire Service, local divers and experts from the National Emergency Management Agency (NEMA).

NAN reports that Alkali, former Chief of Administration at the Nigeria Army Headquarters, Abuja, had been missing since Sept. 3, with efforts to trace his whereabouts yielding no fruits.

The Army, acting on intelligence checks, later narrowed the search to the pond, and insisted on evacuating the water from it.

Speaking with newsmen after the car was pulled out, Maj. Gen. Augustine Agundu, Commander, Special Task Force in charge of security on the Plateau, said that the evacuation of the water started on Sept. 22, after intelligence reports indicated the possible location of the vehicle.

Agundu explained that Alkali was caught up in a fracas at Dura, when irate youths blocked roads and attacked travelers following an invasion of the community on Sept. 2, during which 13 persons were killed.

“We started this search on Sept. 22, when we were ordered by the Chief of Army Staff to find the missing officer.

“The officer, who retired in June 2018, after 35 years of service, was traveling to Bauchi when he ran into the mob.

“Immediately we got information about his movement, we swung into action to find him. The intelligence report convinced us that this pond was where he was dumped.

“There are about 32 abandoned mining sites in this community; for us to single this one out shows that a lot of intelligence gathering was done.

“This pond contains a lot of hidden secrets. There are four more cars that we have discovered inside. We are determined to unravel all the secrets in it,” he said.

The GOC, 53 Army Division, Maj. Gen. Benson Akinroluyo, while reacting to the discovery, confirmed that the car belongs to the missing Army General.

He, however, said that the body had yet to be found.

“The search for the body will continue immediately,” he said, and advised members of the community to go about their lawful duties.

“The Army will not intimidate anyone on these findings. The vehicle is indeed that of missing Alkali. We have not seen the body, but the registration number on the car is his own.

“The Army T-Shirt we found in the car has his name tag on it, so I can confidently confirm that all the things we have found here belong to him.

“The army is a professional body which carries out its operation according to best global practices and human rights. We will not arrest anyone not involved.

“Our intelligence pointed to where his vehicle was pushed to, so you should know that we have credible intelligence on who was involved and we will get them arrested,” he said. (NAN)