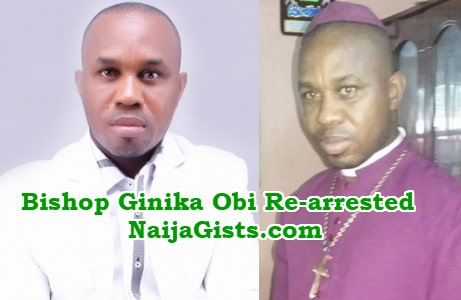 The EFCC has re-arrested a Bishop and suspected fraudster, Ginika Obi, in Benin City, for allegedly defrauding thousands of people of various sums of money running into millions of naira.

The Bishop who was arrested back in 2017 for defrauding many to the tune of N500million has been re-arrested for running a Ponzi Scheme.

The suspect allegedly collected the money from his victims in the guise of helping them to ‘fight poverty.’

The founder of Beloved Gideon Foundation, based in Agbor, Delta State, with outreaches in Bayelsa, Onitsha, Lagos, Port Harcourt, Abuja, and Benin City, however, denied any involvement in fraud claiming that he was only “doing the will of God by trying to help the people fight poverty.”

According to a statement by the acting EFCC spokesman, Tony Orilade, in Abuja on Monday, Obi said it was his desire and God’s will to see people prosper that led him into operating what appears to be a Ponzi scheme.

Obi, who claimed to be a consecrated Bishop with a diploma in theology explained that he was selling what he called nuggets for successful living to subscribers to the scheme.

According to him, when he left Agbor for Lagos, his desire was to expand his subscription base but his subscribers were impatient.

“If they had allowed me to hold the conference in Lagos, I would have paid them,” he claimed.

However, some of his victims who thronged the EFCC office since his arrest, described him as a fraudster, claiming he defrauded them.

A victim, Janet Okafor reportedly told the EFCC that Obi claimed to be a representative of Gideons International, an organisation that distributes Bibles and Christian literature.

On how she became a victim of the scheme, Okafor, 35, who claimed she had never participated in any ponzi scheme in the past said she fell for his tricks because “the Bishop swore with the Bible.”

“The Bishop knelt down and swore with the Bible; He convinced us that he was from Texas, USA and we believed him. I subscribed with N10, 800 and he paid me N15, 000. It was after this that he engaged over 60 of us as canvassers. I brought many people including my relations and friends. All together, they invested over N5 million,” the victim was quoted as saying.