A Catholic Priest from Nigeria has been arrested in the United States for sexually assaulting an innocent young girl back in 2006.

According to Boston Globe Reports, 50-year-old Christian Ohazulume working as a Chaplain at a Boston Hospital allegedly assaulted an 8 year old girl when he arrived the US as an extern priest from Nigeria.

The alleged assault happened at the family house of the girl in question in Randolph town, Massachusetts back in 2006 when the priest just landed in the United States. 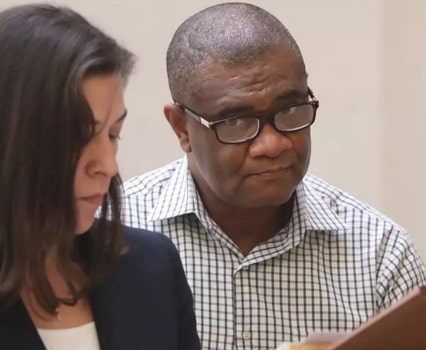 He was arraigned at a Quincy District court yesterday and charged with 3 counts of battery of  child under 14 and aggravated indecent assault.

Rev. Ohazulume has been fired from his job.

The victim said the attack occurred when she went to Ohazulume’s bedroom for help with her homework a night when no one was home.

He reportedly rubbed her private part over her clothing after forcing his tongue on her mouth.

The victim said she ran out of the room to escape further assault.

The alleged victim who is now a student at Roxbury Community College said her parents took her to Nigeria when she was 12 before she later returned to continue her education.

According to the Roman Catholic Archdiocese of Boston, the former employee of Beth Israel Deaconess Medical Center in Boston was a resident priest at St. Mary of the Assumption Parish in Brookline before he was charged.