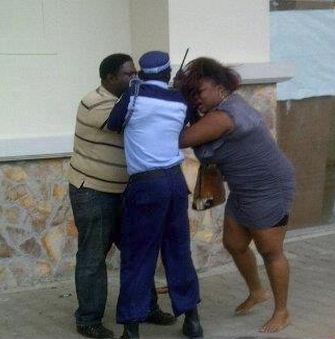 Two husbands and their wives who allegedly attacked themselves with blades and sticks were on Tuesday arraigned at an Ikorodu Magistrate’s Court for breach of peace and assault.

Tijani Ganiu (55), his wife, Omolara (46), Lukman Abiru (58), and his wife Oluwakemi, (38), all of 38 Oriwu Road, Ikorodu, Lagos, were accused of conducting themselves in a manner likely to cause breach of peace by fighting in public place.

The prosecutor, Corporal Abosede Adegeshin, told the court that On August 28, at about 10:00am at their residence, one couple engaged the other couple in a physical fight, using sticks and blades to beat and cut each other up.

She added that the fight was caused by a minor disagreement between their daughters and that both couples’ children also joined in the scuffle.

The offences, according to the prosecutor, contravene Section 54 of the Criminal Code of Lagos State, 2011.

They all pleaded not guilty to the charges and were granted bail with a sum of N100, 000 and two gainfully employed sureties each.

The Magistrate, Mr. O. O. Olatunji, remanded them in prison till they perfect their bail bond.