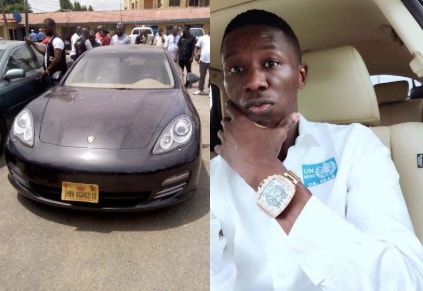 A resident of 2667 Hilton Layout in Lekki Lagos has appeared before an Ikeja Magistrates’ court for allegedly stealing 2 cars worth N31.5M.

The suspect, 26-year-old Michael Thompson Williams, a doctor turned hacker reportedly committed the offence at 7:50pm in Ajah area of Lagos on the 10th of May 2018.

According to police investigation, the suspect stole a N28million Porsche car owned by one Adewale Abidogun.

On the same day, the suspect also stole a N3.5Million Camry belonging to Oluwaseun Omopeyi.

Williams who was first paraded by police for several fake business transactions online on the 21st of May 2018 appeared in court yesterday  and was granted bail in the sum of n2.5million with 2 sureties in the like sum.

The case has been adjourned until the 6th of August for further mention.