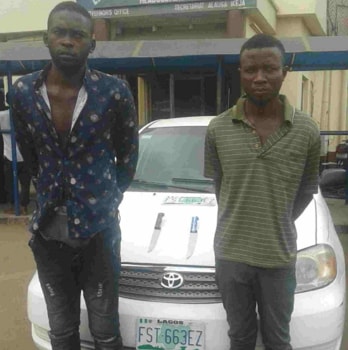 One Mr Lucky Friday, was today brought before an Ikeja Magistrates’ Court for allegedly robbing an Uber driver of his Toyota Corolla car valued at N1.4 million after stabbing him on the stomach.

The suspect whose address was not provided, is facing a two-count charge of conspiracy and armed robbery.

Police Prosecutor Benson Emuerhi had told the court that the accused committed the offences with others still at large on March 16 at Ekingbon Estate in Lekki area of Lagos.

He said the accused allegedly stabbed the complainant, Mr Godfrey Ovie, on the stomach with a dagger and robbed him of a Toyota Corolla car with registration no. FST 663 EZ valued at N1.4 million, property of the complainant, Alexander Abiola.

The prosecutor said the accused was also armed with other dangerous weapons.

“The complainant was attacked while driving the accused and his accomplices who had earlier boarded his car.

“Suddenly the accused brought out a dagger and stabbed the complainant on the stomach and thereafter robbed him of the car.

“He was arrested by some policemen from Ajah Police Division while trying to escape, while accomplices fled the scene in an unmarked motorcycle,” Emuerhi said.

The offences contravened Sections 297 and 299 of the Criminal Law of Lagos State, 2015 (Revised).

Chief Magistrate Olufunke Sule-Amzat remanded the accused in prison and directed that the case file should be sent to the Lagos State
Director of Public Prosecutions for advice.

Sule-Amzat adjourned the case until Oct. 22.