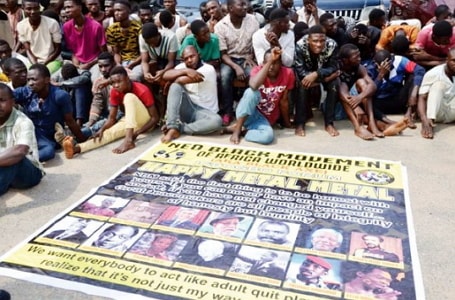 13 of the 137 persons arrested for alleged cultism have accused the police of wrongfully picking them up.

The suspects, who were paraded yesterday by Lagos State Police Chief Imohimi Edgal, claimed that they were arrested while going about their lawful businesses.

The police on Saturday and Sunday nights raided some parts of the state to frustrate plans by the Black Axe confraternity to foment trouble during their yearly July 7 celebrations.

About 120 of them were arrested at Ikorodu and a big banner with Black Axe logo, a keg laden with liquid suspected to be an Indian Hemp-based drink called ‘skoochies’, six small kegs of skoochies, a big clay pot, two small calabashes and a locally made pistol recovered from them. The others were nabbed at Ogombo in Ajah.

Edgal said the command had warned “cultists” preparing to celebrate their sacred day called 7/7 not to converge on any part of the state.

“We also encouraged good Nigerians to give information about these groups of persons anywhere they are seen.

“Based on credible intelligence available to the command, which was communicated to the Officer in Charge of Anti-Cultism, 120 suspects were arrested at Ikorodu, where they were observing 7/7, undergoing initiation in preparation to unleash mayhem on the larger society.”

But, a Ghana based footballer, Emmanuel Megai, 26, a man, Gabriel Aligbe and his wife, Ebele Joseph, as well as a group of 10 young girls, who were arrested, at Ikorodu, said they were neither near initiation venues, nor were they cultists.

Megai said he had gone to Ikorodu to visit his girlfriend, adding that he was in his hotel room when policemen jacked his door and arrested him.

“I am 26-year-old and I am from Delta State. I play football in Ghana. I lodged in that hotel that night because I came to see my girlfriend who lives in that area. I am not a cultist. I do not know any of these suspects here.

“I was inside my room when the police jacked my door. They opened it and arrested me. I have my identity card with me and you can see it yourself. Please, help me out. I do not want my career to be destroyed.”

Aligbe, 33, said he and his wife went to watch Masqueraders dance at the Oba’s palace and were on their way home when they were arrested.

“We went to watch Masqueraders at the Oba’s palace. It was past 9pm when we were going home. As we were waiting for a motorcycle, a task force vehicle stopped and ordered us to enter. They did not tell us what we did. They took us to that Vatica Hotel and brought some boys out.

“Some were stained with blood. Because they packed us together, the wrist of my shirt got stained too. They have not allowed me make a call.

“I am a simple motorcyclist. Nobody knows I am here. I did not know what I did until now that I heard them say all these things. Ko ye mi o! Ejo o! Eshanu mi o!. (I don’t understand! Please have mercy on me!) I have family but my phone is not with me.”

Joseph wondered why they were being paraded like criminals.

Similarly, Musiliu Taiwo, 25, said she was at the party of her friend, Popoola Abosede, when she was arrested.

“We were 10 that attended my friend’s party on Friday. It was Popoola Abosede that was having her birthday party and we were at Vatica Hotel in Igbogbo, Ikorodu.

“It was on our way back that we saw those guys with banner. We did not understand the meaning and before we knew it, we were raided.”

“I did not do anything. I am not even aware of the birthday party. I just came to Lagos to visit my friend to see if she could help me get a job here.

“My parents are in the village. I was even going back to her place to rest, before I knew it, the police team raided all of us.”

A noodle seller, Kwanu Idegeme said the officers who arrested them, took them to Vatica Hotel, where a party was going on.

“I sell noodles and egg in the morning and at night in front of my house at Igbe Road, Ifeoma junction.”