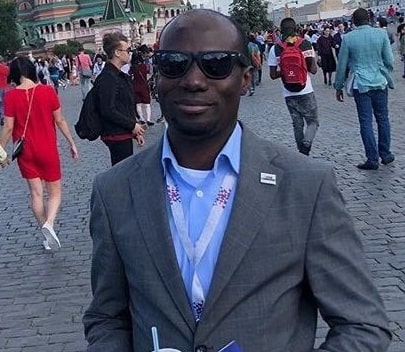 The wife of Aliu Tijani Abubakar, a teacher, who was killed in cold blood at Bishkek, Kyrgyzstan, has called on President Muhammadu Buhari and the Government of Kyrgyzstan to bring his killers to justice.

The 38-year-old Aliu, who was born in Kaduna State, was reportedly attacked by Kyrgyz citizen on July 2, 2019 at the Bishkek city centre.

The deceased studied Economics and established a popular Cambridge English School in the city.

He was said to have dedicated his entire life teaching English language to the Kyrgyz people.

It was gathered that Aliu left Nigeria to Kyrgyzstan on 18th June, 2019 after spending the month of Ramadan and celebrating the Islamic festival with his family and friends.

Reliving her ordeal, Amina, the devastated wife of the deceased, said she was yet to come to terms with the brutal manner her husband was attacked and killed by the citizen of the country.

She explained that her husband, the Director of Language School, Cambridge Bishkek was brutally attacked near a Central Department Store in the town of Bishkek by an unidentified man.

Amina, who cried uncontrollably, wondered how she could cope with their daughter without the family breadwinner.

Amina said her husband spent 18 years in the Central Asian country before he was assassinated.

She said: “He was a gentle, nice and amiable person. He dedicated his entire life to teaching the Kyrgyzstan people English Language.

“He left Nigeria on the 18th of last month, few days after the Sallah celebration.

‘’He normally observes his Ramadan fast every year in Bishkek, but this year he chose to come to Nigeria during the holy month.

“On the day he was attacked, we were on phone talking. The moment he was attacked on his way back from KFC, he hung up the call, promising to call me back soon. But till date, I am yet to receive that call he promised me”.

She called on President Buhari and the Kyrgyzstan Government to fish out the killer and bring him to justice.

She said: “I can’t fathom why someone in the country my husband has served diligently will be so hostile to him.

“My beloved husband had once survived gunshots when some of his business rivals, who run a similar language school, attacked him.

“When he took them to court, he won his case. They then signed an undertaking that they would be liable to anything happened him.”

It was, however, reported that a suspect was arrested and placed in a pretrial detention center for two months following the order of the Sverdlovsky District Court.