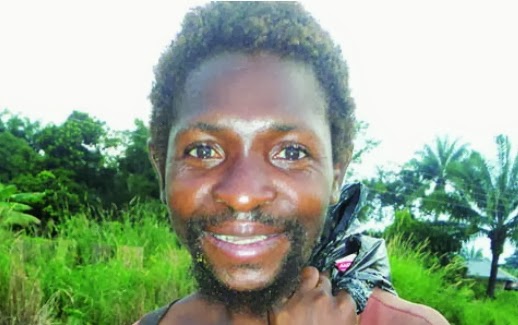 For the family of Mr Ogbonnaya Ani in Umuose Urobo, Uburu, Ohaozara Local Government Area of Ebonyi State, life can’t be more cruel to seven members of the household now afflicted with madness one after the other.

Indeed, 70-year-old Ani is swimming in the ocean of grief, anguish and pains. He paints a perfect picture of a fellow whose gods have not been benevolent enough to crack his palm kernel for him. Rather, they watch his blessings turn to blemish.

The Ani family is being ravaged by the spirit of madness. Take this: Ogbonnaya Ani’s elder brother’s daughter is mentally challenged. His younger brother’s son is in the same condition. Three of his own children, a male and two females, are equally afflicted. His daughter-in-law is not left out. So, there are six mentally ill persons in the family and, perhaps, still counting. Worst still, one of Ani’s mentally challenged daughters is heavily pregnant and no one seems to know who the lover boy is. And before his first wife died, she exhibited some signs of madness.

Recently, our reporter encountered the distraught Ani. He told the stranger than fiction story. There is no doubt that the madness ravaging his immediate and nuclear families have left its toll on the old man. Sadness is evident in his sunken eyes. He looked frail and his voice quakes in palpable agony as he spoke. But for the magnanimity of a relation, Ani and his household would not have had a place to lay their heads. This is because his mentally challenged son, Igwe Ani, alias Martin Martin, set his house ablaze. And before help could come, the structure had been reduced to ashes. So, currently, Ani and his family are squatters somewhere in Umuose Urobo in Uburu, Ohaozara Local Government Area of Ebonyi State.

When the reporter visited the family last Wednesday, Ozieme, Ani’s beautiful but mad daughter, was hanging around. With her tummy protruding as a result of advanced pregnancy, she looked vacantly into space, perhaps unaware of her environment and condition. A few times she smiled and muttered to herself. When asked to pose for a photograph, Ozieme obliged.

Before Ozieme became sick, she was a very beautiful girl. In fact, in spite of her condition, glimpses of her beauty remain. And even in her state of madness, men still find her attractive and make love to her. The evidence is the bulging stomach she is carrying.

“This place we are is not my house,” began Ani, who spoke in his native dialect. “My place is further up, after Oriebe. I relocated to this place because of the problem that I’m facing. I had a small mud house and I made it good enough for people to stay in before the problem started through my son, Igwe. It first started with Igwe and his sister, Ozieme joined later. While Igwe’s problem started at home, Ozieme’s started from outside the community. When she travelled and returned, she began to behave abnormally.”

In an agony laden voice, Ani continued: “I don’t know how it started but we suspected or thought that Igwe joined his mates to smoke all sorts of things. I cautioned him to stop it if he was indulging in such act but there was no difference. We used to beat him to stop smoking to know if he would but to no avail. He started manifesting madness about eight years ago. He was still in primary school when it started; he was in Primary Four when he broke loose. Because of the problem, he couldn’t continue with his education. I cannot really say if he brought it upon himself by smoking certain substances or it is a problem destined to come”.

Ani said that the problem reached a crescendo when Igwe burnt down his house. “He used to pack all sorts of rubbish and dump in the house. It was impossible to chase him out of the house because he used to wield cutlasses and wood, threatening to harm anyone who gets close to him. At a point, he had outgrown everybody. On a certain day, he set the house ablaze and before people could come to fight the fire, things had got out of hand. That was how the building containing two rooms, a parlour and big verandah were razed down. Thereafter, we became homeless, so I brought my wife and kids to stay in a relation’s place. That was how we relocated.”

Ani said that his daughter was okay until a certain man from Nsukka in Enugu State came to seek her hand in marriage. According to him, the man eloped with the girl, adding that by the time she returned home, she had lost her mind even as she nursed a baby.

His words: “In the case of Ozieme, there was a time she travelled to Enugu to stay with her brother. There she started a relationship with one man from Nsukka and they agreed to marry. She brought the man home and introduced him to us. After meeting with us, the man said that he was going to prepare and come back for the formalization of the relationship. She insisted on going with the man; we asked her to wait for the man to go and come but she refused. We didn’t see the man again. When she was coming back, she came with a baby and started behaving in a manner we could not understand. We tried all we could to deal with the situation to no avail. This thing happened about five years ago and we have not set eyes on the man ever since. She didn’t have the soundness of mind to breastfeed and properly care for the baby and she died. Right now, she is heavily pregnant, she will be putting to bed anytime and we do not know who is responsible for the pregnancy.

“Again, another of my daughter who is married and a seamstress is also behaving abnormally. I cannot explain how this problem came into the family. From our parents, we did not experience any such thing. It did not happen to my eldest brother, who had died.”

Madness is becoming a sort of tradition in the family. Take this from Ani: “I cannot say how it came about because I’m not God. But my brother’s daughter, Nweke is also having a mental problem. In her own case, someone took her to a town and later brought her back, saying he could not understand her behaviours anymore. He said that she was talking out of sense hence he brought her home. So, if you ask me, I would say that that was the time I started seeing such a thing in the family. She was the first in the family to be afflicted by the problem. It started about 20 years ago and it has been spreading from one person to another. Even my son’s wife who was married from another village and living in Enugu with Ozieme is also behaving in a way we cannot understand. I learnt that she is walking about the street but I have not seen her. The whole thing is surprising to us. It is an unimaginable disaster. It is a heavy burden on us and we do not know what to do about it. In fact, it is beyond us. If not that we surrendered ourselves to God in prayer, asking him to protect us, who knows what would have happened now?”

Asked if such trait could be traced to his late wife’s family, he said: “In the family of my deceased wife and mother of these mentally challenged children, they had a problem somewhat close to this. But in their case, it wasn’t so pronounced as this. In their own case, it made them to be talking too much. In a nutshell, I would say that my wife’s family manifested a semblance of this problem but it wasn’t full blown like this”.

At a point, Ani couldn’t continue his blood chilling story as he seemed drained of energy. Admitting that he was overwhelmed by the development, he, however, attributed his staying power to the grace of God. “If not God, perhaps I would have been consumed,” he remarked.

Speaking on the matter, an Urobo village leader, Chief Augustine Aja Akuma, said: “When the problem started with Igwe Ogbonnaya Ani, we thought that he had joined some boys to smoke dangerous substances because, at the time, he just returned from Kano where he was staying with his brother. We used to tie him with ropes and beat him in a bid to stop that sort of thing. But the more we tried, the worse the situation became. It got to a point when he began to strip himself naked and started behaving in an incomprehensible manner. He started eating dirty things”.

Chief Akuma further said: “We were yet to come to terms with Igwe’s condition when his sister, Ozieme returned from her station and started behaving abnormally. We started wondering if it was the Nsukka man she ran to that caused it. But if the Nsukka man was responsible for Ozieme’s madness, what about her brother’s condition? Again, if Igwe smoked something and it turned his brain as some thought, did his sister also smoke the same thing? These are questions that could not be answered. We have been battling to solve the problem without success. We have brought several prayer groups to the family”.

Affirming that it runs in the family, Akuma volunteered: “Pa Ogbonnaya Ani’s brother’s daughter (niece) also had the same problem. In fact, she has been in it for over 20 years because the child she bore when it started is in his 20s now. We don’t know how this thing came about because Pa Ogbonnaya’s father and mother were not known to be mad just as Ani’s siblings were all sound in mind. Why the problem befell their children we cannot explain.

“About four or five years ago, Ogbonnaya Ani’s younger brother’s son (nephew), Sunday Onu, started acting funny. He is a bit calm now because of injections being administered on him by psychiatrist people but that does not mean that he is normal. Ani’s three children – one man and two women are affected. His son’s wife, who we married from another village, suffers the same fate. We don’t know what this means. We don’t know whether it is a curse or spiritual attack. As I said earlier, we have invited prayer warriors from different churches on several occasions and they came to pray with the family, yet it has defied all solutions”.

Disclosing that the family is in dire need of assistance, he said: “We are appealing to government, well meaning organisations and individuals to come to the aid of the family because they have suffered too much. Ogbonnaya Ani is above 70 years of age, yet he bears this sort of tribulation. At his age, he ought to be enjoying the fruit of his labour, he is supposed to be taken care of by his children but he is the one taking care of them because of their health condition. Whatever help that could be extended to the family will be of immense benefit to them.”

[Report by Henry Umahi, First Published on The Sun]