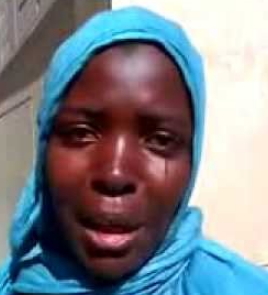 Nigerian Girl Trafficked To Saudi Arabia To Work As Slave Appeals To FG For Freedom, Says Employer Has Locked Her Up

Several Nigerian girls trafficked to Morocco, Saudi Arabia, Oman and other Arab countries to work as maids have been turned into slaves, The Nation has learnt.

Among the victims are those identified as Iya Ibeji, Ayo, Monisola, Adejoke and Adefolakemi, who were said to have been trafficked to Saudi Arabia on December 30, last year.

Adefolakemi, The Nation learnt, was battling chronic depression and had collapsed twice at her master’s place because she was being made to work from 5am to 9pm, denied freedom and usually locked inside the house.

The victim, who was being threatened by her traffickers for insisting that she wanted to return to Nigeria, was asked to pay 18,000 Riyals (about N1,728,776) or serve her master for two years.

According to her, she was lured by her secondary schoolmate, Adetutu Kassim, who took her to meet one Olori Omolara, alias Mama T of LT Travel and Tours with the promise of a job and good salary. She said: “They told me that they would get a job for me and I would earn good salary. They never told me they were taking me to Saudi Arabia for modern slavery.

“Adetutu is in Oman, another Arab country. She took me to meet Mama T and Mama T now took me and some other girls to a hotel in Abuja, where we met an Arab agent called Ashiraf.

“We were taken to a hospital, to a doctor at Wuse for medical checkup, and on December 30, we left Nigeria through Ethiopian Airways.

“They then gave me to another family, who said the paid 16,000 Riyals to the agency to take me. I was taken to the woman’s house, and she said that I would be on monthly salary of 750 Riyals. She said I was not allowed to go out.

“I do not have permits. She said I had to work daily from 5am to 9pm, and I was entitled to an hour break. I had to endure the unbearable conditions the first two months so that I could pay Olori.

“I paid the money. The woman I worked for was the one who sent it through Western Union. She never showed receipts but she told me she had sent the money and Adetutu usually acknowledged that Olori had received the money since I was not in contact with Olori.

“After paying the two months, I told them I wanted to go back home, but they refused, saying that I must pay 18,000 Riyals or work for the woman for two years before I could be freed. They took me to the police station and threatened to deal with me. But I told them that my health was failing and I could not continue with that kind of work. They refused to listen.

“I have been put under house arrest. They even sent a Nigerian woman to come and convince me to stay, and that if I refused, they would hand me over to the police and I would be gang-raped and sent to prison.

“I am going through hell here. The other girls are also not finding things easy but it seems they are still paying Olori because they said they were still in debt and have to continue suffering until they finished paying their debts.

“Honestly, this is modern slavery. I accepted the job when I was told because I felt since it was abroad, it would be better than Nigeria. I did not know that these people treat others like animals.

“When I complained to my madam that the work time was too much (16 hours daily), she agreed to give me an hour break, which was between 3pm and 4pm. But she later changed the break time to 10am-11am, saying she discovered that I used to rest when she was at school teaching.

“Please, I am begging Nigerian government to come and take me out of here before I die. My health is failing. Every day, I clean seven rooms, three toilets, two parlours, a kitchen and a big compound about four times. I wash and iron daily too. Now, I cannot even stand again because my legs are shaky.

“I wake up at 3:30 am every day and would work from 5am to 9pm. What kind of life is that? They said that is the law in Saudi. The woman tried to seize my phone the other day to stop me from communicating with my family. I don’t have a telephone number.

“I don’t have a SIM card. I chat on WhatsApp through my Nigerian line through the internet in the house. She has threatened to turn off the internet to cut me off.

“She said I cannot go anywhere unless my family paid her 18,000 Riyals. I told her to ask the agency she gave money to because they did not give me anything.

“I do not know anywhere here. I am not allowed to go out. Even if I want to throw waste, her son must accompany me. It’s slavery, modern slavery. Where will I get 18,000 Riyals?

“I am afraid here that something might happen to me. I fear that I might not return to Nigeria again. I fear I might die here. I am losing my mind.

“I think an agency in Saudi contacts Olori and she supplies girls to them. I don’t know their arrangements, but I know that at the end of the day, they are the ones benefitting while the girls are miserable, exploited.

“The woman I work for is Famita Mana AlDossari. They live in Alkhobar, after Dammam. Dammam is a popular state in Saudi. I need help please.”