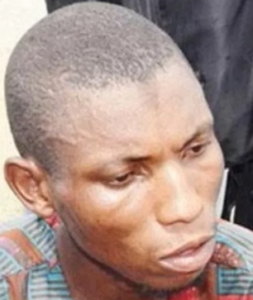 Mohammed Mohammed, a 33-year-old man was today remanded in prison by a Minna Magistrates’ Court, for allegedly attempting to kill his father.

The accused is facing a count charge of attempted culpable homicide, contrary to Section 229 of the Penal Code.

Magistrate Amina Musa, declined to take his plea on the ground that the court lacked jurisdiction to hear the case.

Musa directed the police to forward the case file to the State Director of Public Prosecutions for legal advice.

She adjourned the case until May 10 for further mention.

Police prosecutor Muazu Abdullahi, had told the court that Mohammed of Kpaki village, Mokwa Local Government Area, attacked his father Mohammed Chado, with a cutlass while on his way to farm on April 15.

He said that the accused attempted to kill his father by cutting off his left hand and inflicted injuries on him.

Ibadan Based Serial Drug Dealer Kasali Oluokun Jailed For 3 Years For Drug Trafficking
Nigerian Girl Trafficked To Saudi Arabia To Work As Slave Appeals To FG For Freedom, Says Employer Has Locked Her Up