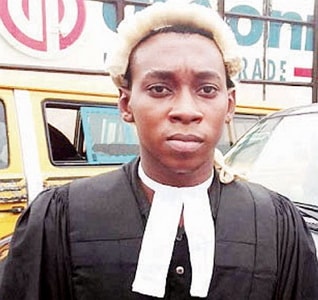 A university dropout, Destiny Otubambo, 27, has been arrested by the police in Lagos for alleged theft and obtaining by false pretences.

Otubambo, the police said, obtained a phone from a dealer at Ikota Shopping Complex Lekki, Ajah, on May 24 by generating false alert.

The suspect, a university dropout, said to be parading himself as a lawyer, allegedly requested for phones valued at N377,500 and opted to pay by mobile transfer.

Parading the suspect yesterday at Ikeja, Police Commissioner Imohimi Edgal said: “He was given the account details to which the said amount should be credited. After few minutes, he claimed he had credited the said sum. To prove he had, he showed a debit alert from Zenith account number 2110746005, titled, Desitny Ayo Adeleke.

“Believing it to be true, the shop owner released the phones to him and requested for his phone number. When she did not see the alert, she tried the phone number but it was unreachable and the account number was non-existent.”

Edgal said a case was reported and detectives from the Federal Special Anti-Robbery Squad (FSARS) picked up Marian Amuche, the suspect’s lover, through whom Otubambo was also arrested.

He said: “Amuche led detectives to arrest Otubambo. On interrogation, he confessed to the crime and that he had sold the phones to buyers he met online.”

He said three mobile phones, 10 simcards and lawyer’s wig, gown were recovered from the suspect.

Otubambo said he generated fake alerts by editing original ones, adding that there was a time he tried to generate fake N5.3 million but was not successful.

“The account is not for me. I forged it. I was arrested last week. I was studying law before I dropped out from school because of financial issues.

“My dad is late. I bought the lawyer gown from the market for N35,000. I have never been to the court before neither was I called to bar. There was no motive behind buying the gown. I just bought it and uploaded pictures I took on social media.”

Continue Reading
You may also like...
Related Topics:arrested, drop out, law school

The Aftermath Of Katsina Heavy Rainfall: 38 Killed, 200 Houses Destroyed By Flood As Rivers Overflow Their Banks
Yahoo Boy Who Slept With Girlfriend’s Corpse After Using Her For Ritual Remanded In Prison