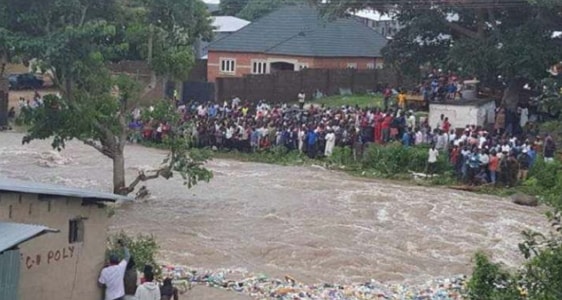 The Aftermath Of Katsina Heavy Rainfall: 38 Killed, 200 Houses Destroyed By Flood As Rivers Overflow Their Banks

38 persons died and over 200 houses were destroyed in yesterday’s flood at Jibia Local Government Area of Katsina State.

The rain, which started about 11 pm on Sunday, lasted till 1 am yesterday, and caused rivers to overflow their banks.

The disaster sacked many residents from their homes and shops.

Among the 38 persons killed is a food vendor – Halima Zubairu Jibia, and her two children – her container shop around Sabuwar Mosque was swept away.

They were trapped in the container because they hid there when the rain started.

The District Head of Jibia, Alhaji Rabe Rabi’u, who confirmed the development in a telephone interview, described it as “highly devastating”.

He said: “As I speak now, we have found the bodies, including mothers and children, and many are still missing. Over 260 cows, sheep and goats also died in the flood. The rain started about 11 pm on Sunday night and stopped at 1am on Monday.”

Rabiu appealed to governments to come to their aid, saying “it is only the government that can assist us because the situation is beyond our financial strength.”

The council’s Information Officer, Sa’ad Suleiman, said the situation was aggravated by those building on water channels and dumping refuse in drains.

According to him, the government had dredged rivers, canals and cleared drains, urging residents to dispose refuse properly and stop dumping them indiscriminately.

Executive Secretary of the State Emergency Management Agency (SEMA) Aminu Waziri, who confirmed the casualty figure, said a rescue team was in Jibia.

According to him, Governor Aminu Masari has visited the area to assess the damage.

He said: “What we are doing presently is to find temporary accommodation for people whose houses were washed away or damaged. As I speak now, no fewer than 38 people have died.

“Sympathisers from neighbouring Niger Republic helped us to remove two bodies from a river. We have buried 21 bodies and arrangements are on to bury the remaining 17.

“Over 200 houses were either washed away or damaged in the rainstorm.”

Governor Aminu Masari, who addressed reporters yesterday, said he called the President to acquaint him with the development, and he directed government agencies, including NEMA, to help.

Masari added that the government has temporarily resettled victims at a nearby primary school and provided them with immediate reliefs. He added that NEMA is sending 13 trucks of relief materials to the town today.

He said: “I went there to see things for myself; I have never seen such a natural disaster as big as what happened in Jibia. Occupants couldn’t salvage anything; the flood is over 10 feet deep, there was drainage but because of the heavy down pour, the drainages that would have emptied into the main river were beaten back by the river; 20 people are still unaccounted for, including a two-day-old bride.”