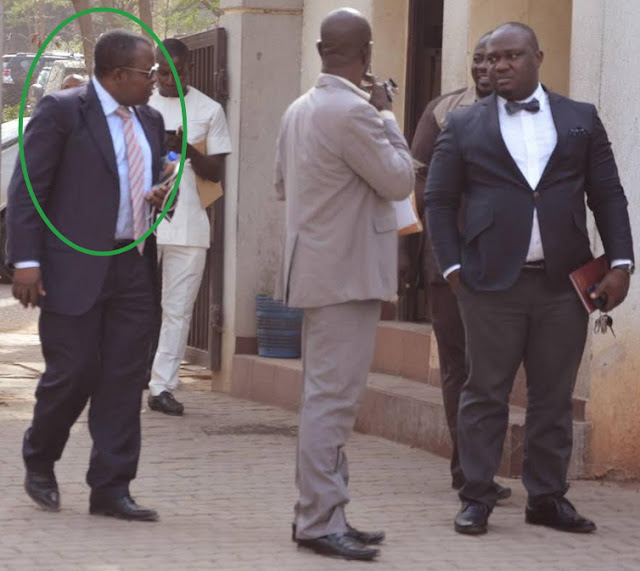 2 Abuja Based Lawyers, Nsikak Udo and Farouk Khamagam Charged With Forgery For Forging The Signature Of Late Charity Aiyedogbon

Three lawyers, Emeka Ugwuonye, Nsikak Udo and Farouk Khamagam were on Thursday, arraigned before Chief Magistrate Court 2, in Wuse zone 2 area of Abuja, presided over by chief Magistrate Mabel Bello, for their alleged criminal roles in the case of the disappearance of missing Abuja woman, Charity Aiyedogbon.

While disbarred Lagos lawyer, Emeka Ugwuonye is charged with criminal defamation, the other two lawyers were charged for forgery and perjury.

Following their arraignment, the accused persons, through their lawyers applied for bail.

Opposing the bail application by Mr. Ugwuonye, the Prosecutor, Adama Musa described the accused as notorious, expressing fears that he may jump bail. He alleged that he is in the habit of not honouring invitations, adding that he has dual citizenship and may jump bail, if granted.

In his ruling, the chief Magistrate, Mabel Bello granted him bail in the sum of five million Naira (N5m), with a surety, who must be a Civil Servant and must earn not less than three hundred thousand Naira monthly, with a traceable address in the Federal capital territory.

The other two accused, Nsikak Udo and Farouk Khamagam were granted bail on self-recognition, being practicing lawyers, resident in the Federal capital territory.

Ugwuonye’s criminal defamation matter comes up on the 16th of March, 2018, for hearing, while that of Nsikak Udo and Farouk Khamagam is adjourned to March 30, 2018.

It is not clear if Mr. Ugwuonye has fulfilled his bail conditions, as at the time of filing this report.

Ugwuonye, who had claimed to have an overwhelming evidence that the missing woman was dead, and that she was killed by her estranged husband, David Aiyedogbon, is expected to show evidence to the Court.

His trouble may have started when, in different posts on his Facebook group, Due Process Advocates- DPA, he said:

In another post, he said: “this is the headless and dismembered body of Charity Aiyedogbon (posting a corpse on his DPA Facebook group). DPA has been able to identify this as her body within the limits of resources at our disposal.”

“I will describe David as a low-life and cold-blooded murderer of his own wife. The only reason I would not go further to describe David in the most despicable language that he rightly deserves is that I would rather focus my argument on points that would lead to justice for Chacha.”

When invited by the Police to produce evidence, after several meetings, Ugwuonye was unable to produce any, to substantiate his claims.

Ugwuonye is already facing a N10b defamation suit filed by Mr. David Aiyedogbon. The Suit, with number CV/2750/16, before Justice Peter Kekemeke of Federal Capital Territory (FCT) High Court 14, Apo Abuja, also prays that the defendant be ordered to pay the cost of the suit.

Similarly, the other two Abuja-based lawyers, Nsikak Udo and Farouk Khamagam, charged alongside Ugwuonye are said to have confessed in writing to the Police that they forged the signature of their missing client, Charity Aiyedogbon.

Their trouble started when, those believed to be close to the missing woman were quoted as saying that she went missing on the 9th of May, 2016, but her lawyer, Barrister Nsikak Udo, handling a suit filed at the Federal High Court, Lokoja on 29th April, 2016 against 29 respondents, including her biological children and former husband, David Aiyedogbon, claimed she (Charity) came to his house on the 18th of May, 2016.

Following questions arising from the lawyer’s claim of meeting with the missing woman eight days after her purported disappearance, the Police invited him for questioning, wherein he allegedly confessed that her signature was forged.

Confirming the development, a Police source involved in the investigation, who spoke on the grounds of anonymity explained:

“Yes! We charged three of them to Court this morning. The offence of Nsikak Udo and Farouk Khamagam is forgery. In Nsikak’s statement to the Police, he confessed that he forged the signature of missing Charity Aiyedogbon in an affidavit he filed in court in Lokoja. He had earlier claimed that the missing woman came to him and one of his staff accompanied her to a High Court, to sign and depose to an affidavit in support of the ex-parte motion filed along with the case.

The question was: how could someone who was declared missing on the 9th of May reappear on the 18th of May? Following a Petition, the Police investigated the matter. In Mr. Udo’s statement to the Police, he confessed to the crime. He therefore lied on oath. That is the problem. Farouk conspired with him to commit the crime. Ugwuonye’s case is that of criminal defamation. In spite of all the claims he made on his Facebook Group, the Due Process Advocate, when he was invited to produce evidence to help Police investigation, he could not produce any. We took him to Court so he can produce the evidence to substantiate his claims.”

In another development, counsel to David Aiyedogbon, Tony Ogbulafor, has filed a fresh defamation suit against embattled Emeka Ugwuonye in the Abuja judicial division.

Our Correspondent reports that Mr. Ogbulafor took advantage of Mr. Ugwuonye’s appearance in Court to serve him the court papers, since, according to him, all efforts to locate him for service earlier, proved abortive.

The matter comes up for hearing on Monday, 2nd February, 2018.

Hospital Bill Of Boy Whose Intestines Were Ripped Out In School Paid By Imo Deputy Speaker
Photos: Premature Baby Girl Dumped In Gutter By Mother In Agege Lagos Rescued Alive By Declan Ihekaire