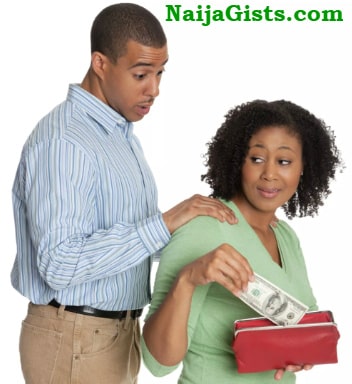 My Nigerian Boyfriend Is Asking For Money, Please How Do I Know If He Is A Scammer Or He Is Truly In Love With Me

Dating and relationships can sometimes be full of challenges and drama. Two individuals getting to know each other sharing opinions disagreeing based on different ideas and opinions, fighting and reconciliation are just some of the hurdles you come across when building a relationship.

The euphoric feeling of being in love or sometimes the lack of better options can hinder us from drawing unbiased conclusions about relationships we find ourselves in.

When dating, it is important to go along with both your heart and head so as to avoid getting hurt. Letting your heart go at it alone will most definitely cloud your judgment.

There are several men whose sole purpose is to prey on desperate females. When dating Nigerian men, ladies ought to be careful because there are a lot of Nigerian men with questionable characters.

To be fair, there are also several Nigerian ladies of this sort. When you find yourself in a relationship where you tend to be the provider, then something is definitely wrong. If you are already thinking that you are being scammed then it is possible you are.

You also have to keep in mind that this is common in all relationships and not only among Nigerians. It will be unfair to base this article on Nigerians alone .

If your boyfriend is financially dependent on you , it is possible that he is a scammer.

How To Know You Are Dating A Scammer

Put genuine questions across to yourself about the character of the man you are dating. Also give yourself truthful and unbiased answers don’t make unnecessary excuses for his behavior. What kind of man is he, is he hardworking, does he possess integrity? Will he do the same if the tables were turned? These are questions you can ask when a man you are dating requests money of you. Is he the kind of man who has no problem being idle, would he rather just sit and rely on you to send him money and take care of him? The type who has no job and has no intention of getting one anytime soon? Answer truthfully you owe yourself that much. Your answers will undoubtedly tell you what kind of man he is.

How frequently do you have to deal with a money request from your man? If you find that you are practically responsible for financially supporting your boyfriend an able bodied male, then you should probably pause and have a talk with yourself. Your boyfriend may need a loan every once in a while which is okay. However when it becomes an every day affair and you always have to pay for his up keep and pick up his bills? That raises a red flag. He may just be using you for what he can gain from you.

Result Of Your Money

When a man consistently demands money of you for one reason or the other, then you should definitely see if the money is being used as planned. Often Nigerian men, who request money of women, would do so under the guise of business. They go on about how it is important they invest in some kind of business deal.

When this happens, do not just hand your money over, be sure of what the money is being used for and follow up on this business. If he is being too closed mouthed about it, flares up to get out of clearly explaining the nature of the business or tries to guilt you into releasing your finances. Two words for you Scam Alert!

Most scamming Nigerian men will drop off the grid for the time being as soon as their financial request is met by you. They are in the habit of disappearing without concrete explanations for their where about. They show up once again when another such need arises.

He may also act suspicious and sometimes receive unusual calls or messages which he would often have to leave your presence to answer. He hastily ends conversations when you come into the room or is unusually protective of his gadgets. These are all pointers to the fact that you are perhaps being used and you may not be the only woman in his life.

Lacks A Source Of Income

When you have a boyfriend who is healthy and more than capable of working or engaging in business and doesn’t. There is nothing he can point to as his source of income. You should thread carefully when he begins to make financial demands and should certainly avoid such men all together. He should have something doing no matter how small.

If he has termed you as a desperate lady, he may tell you things he knows you would like to hear. Provided it gets him what he wants from you at the time. You only hear about his future plans with you but do not physically see him making any tangible moves towards making those plans a reality.

A man who truly loves you will not put unnecessary stress on you; he will not want to be a burden to you in any kind of way. He will not dangle a possible future in front of you with the aim of manipulating you into granting him favors.

The Nature Of A Man

It is in the nature of a man to be a provider; his ego and his need for respect forbid him from being comfortable with certain scenarios. Being solely dependent on a woman is one of such. Nigerian men in general crave a lot of respect. A Nigerian man would want a woman who can give that to him.

As a woman you unconsciously lose respect for a man whom you constantly have to provide for financially. So the chances of a Nigerian man having anything permanent to do with a woman who pays his bills are very slim. Your money is most likely being spent providing for someone else, probably another lady who will accord him the respect he believes he deserves.

Ways To Test A Scamming Boyfriend

If you are dating a Nigerian man who is in the relationship only for the things he can acquire from you financially and other wise here are a few ways you can find out.

Ask Him For Money

Turning the tables on him is a sure way to make him uncomfortable. Watch his reaction closely this could reveal a lot to you. If he is with you for financial gain, he is probably selfish and therefore will not share his money or resources with you.

Appear To Be Dependent

Another way to know for sure is to test him. Give him the impression that your finances are tight or you are experiencing problems at work/ business and that you would need his support financially and other wise. Your scamming Nigerian boyfriend will surely flee in a very short while.

Consistently, out rightly tell him No whenever his requests for money comes up. If he is truly a scammer, it is only a matter of time before he gets tired and moves on to someone else who can fulfill his needs.

Effects Of Financially Supporting A Boyfriend

When you constantly have to fulfill the financial requests of your boyfriend, it takes something away from you consciously or unconsciously. The relationship may generally become unhealthy for you.

You have to work harder to respect him as a man. You may not want to lose respect for him but somewhere deep down you find that you no longer respect him like you once did.

You question his suitability as a partner; because when you look at him you don’t really see a partner but a burden. You constantly worry about what a permanent future with him is going to hold.

You begin to doubt his supposed love and loyalty. His behavior fills you with worry and self doubt. You cannot help but wonder if he truly loves you or if he is just taking advantage of you; which he is most likely guilty of.

Now it doesn’t matter if he is a scammer or if it is simply his nature, overlooking the behavior of a boyfriend who frequently asks money of you is definitely not okay.

It is actually possible for your boyfriend to need your help financially. He may require a loan for one reason or the other, if you are capable of rendering help then by all means do your best to be of assistance. It is alright only if there is a balance in these things, you both equally supporting each other is fine.

But most men would take money from just about anyone but their girlfriends. The reason is because they have their image and ego to protect; a man would not want to do anything to tarnish that image you have of him.

Once requesting money of you becomes a hobby of your boyfriend, it is probably time to save yourself before it is too late. If such a relationship becomes permanent then problems are certainly going to arise in the future. Most men who are really worth your time and effort, who will make good future partners will not continuously take money from you.