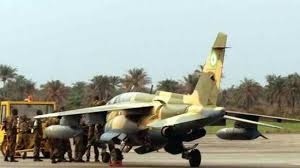 A Military fighter jet that crashed during military operations against terrorists in Mali has crashed in the republic of Niger.

The two pilots on board were killed instantly.

This sad incident is the first causalities of Nigerian troops in Mali.

A spokesperson of the Nigerian Air Force said the plane was an Alpha jet stationed in Niger as part of a Nigerian squadron supporting the mission in Mali.

“An investigation is going on to find out what happened. They were on a normal routine flight about 60 km (37 miles) west of Niamey when something happened,” Anas told Reuters.

Asked if there was any evidence of anti-aircraft fire, he said: “We don’t know but it was inside Nigerien territory.”

A Niger security source said the jet crashed near Dargol in the Tillabery region which borders Mali.

“The plane was not shot at. It was not in enemy territory so for now we are looking at maybe a mechanical problem,” another security official from Niger, who asked not to be identified, said.

May the souls of the freedom fighters rest in perfect peace.