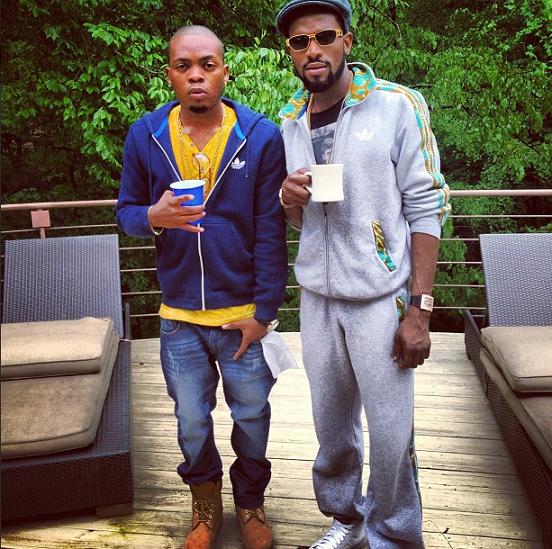 May 7, 2013 – D’banj Collaborates With Olamide; His Endless Struggle For Relevance Exposed

2 years ago, it would have been almost impossible for D’Banj to do a collaboration with an Olamide even if the latter had attained this much attention with his music, but today D’Banj is struggling for another hit since ‘Oliver Twist’.

Once upon a time (October 14, 2010), I tweeted ‘Partnerships can hardly work, not unless you’re a duo like Don Jazzy and D’Banj’… this tweet was ‘favourited’ by Don Jazzy. Then two years later (2012), the statement returned to me – void!

A D’BANJ topic at this point in time would arouse mixed feelings, especially amongst and within fans and pundits. Many would never come to an agreement while some would rather rest the case for another day.

We cannot rule out the fact that most people including yours truly are yet to fathom the reality that the ‘Koko Master’ and his erstwhile buddy, Don Jazzy are no longer together – A creative and business divorce.

The breakup cleared arguments about Don Jazzy as a major influence and source of the quality and quantity of music that came from D’Banj. The source of the music was the least of my problem – I just loved what I heard from production to vocals and lyrics. Everything was fine. There’s no point going into the obvious – we all know the breakup story. The last song that was officially promoted on Mo’hits was ‘Oliver Twist’. It was and still is a monster hit across the world.

Before the rise of Mo’hits, D’Banj released his first set of songs ‘Kiss Me Again’ ft. Ruggedman, ‘One More Time’ and ‘Gba Si Be’ ft. Abounce on OJB’s Silver Tones’ imprint. The advent of Mo’hits and the growth of the D’Banj brand only gave ‘collabo access’ to label mates and close friends like Ikechukwu (Whine Am Well), Kas (Fimile Remix) and Banky W (Lagos Party Remix).

The dynasty was very rigid in collaboration-related matters. We weren’t sure if it was Don Jazzy’s plot to protect D’Banj’s creative weakness or the latter’s personal choice. However, the release of ‘Mr. Endowed Remix’ with Snoop Dogg in 2011 and the Kanye West-Good Music merger confirmed that D’Banj was not about the local league. He had a bigger dream.
Going over the changes that has transpired after Mo’hits’ breakup will be over-flogging the issue. A significant change on D’Banj’s side is his sudden presence on other artiste’s songs.

The first was ‘Bad Pass (Tony Montana)’ by Naeto C, followed by Iyanya’s ‘Kukere Remix’. The fact that these songs were already solo hits made his input less relevant especially at a time when fans and the industry at large expect more. Fally Ipupa was featured on ‘We The Best’, off D’Banj’s DKM Album, but the arrangement made it sound like D’Banj was the one featured.

So D’Banj is also cutting in on Olamide’s recent buzz and they have a song that will be released any time soon. I reckon this is a strategy of some sort to either sustain relevance or a random attempt to cop another hit outside Don Jazzy’s works.
The last Nation’s Cup, placed him on the continent’s spotlight again but instead of unveiling a new song on that platform, he continues with the Don Jazzy produced ‘Oliver Twist’. In my opinion, the ‘Remix’ withKanye West is a waste of an opportunity. Additions like that are done when you are just paying (one off) for the guy to voice a verse or two on your already made song, but when you are a signed artiste on Good Music (especially when it’s a paid merger), creative time should be spent on a song for the sake of the fans and listening community.

Maybe it’s too early to expect much from D’Banj but I am worried for him already. This is a man who has three flawless albums and countless hit songs on his belt. Everything he touched in the past was gold and if one artiste was literally way ahead of his time, it was D’Banj. He is the only artiste who would drop his Glo Ambassadorship due to complications from renewal talks and fee. Even at that, the guy was not blabbing when he said ‘I make 10 million in a week…’ on ‘Gbono Feli Feli’ (2008). He is still one of the most awarded artistes of the last decade. I mean, if he drops the music today, his achievement may not be surpassed in years to come.

The mass influx of sounds and artistes in Nigeria today is enough to distract the most loyal of fans. Ghanaian rapper, Sarkodie already has a lot of fans in Nigeria; same way new artistes are sprawling up every day to have a share of the cake.

I don’t know how long we will have to wait for D’Banj but if the collaborations are intentional and strategic to fuel his relevance – let’s file! Don’t touch it!

[Article by Silas, A Lagos-based writer]