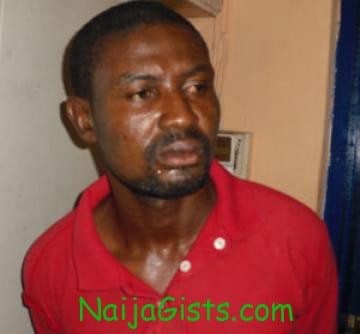 Dec 21, 2011 –  Fake Prophet Arrested For Claiming To Exorcise Evil Spirits With His Penis

A self-acclaimed Nigerian Prophet by the name of Efe Ese has been arrested for claiming to Exorcise evil spirits with his Penis. naijagists.com

He got into trouble after stealing from one of his innocent victims.

Efe Ese is know for hynotising women he prophesied to and lured them into believing that they were tormented by evil spirits. He told them he had to have sex with them so he could exorcise all the demons which, he claimed, were responsible for all their misfortunes.

The lid was however blown off his activities when he bolted with a digital camera and a laptop computer during a prayer session with one of his victims after a hot bout of sex. The Divisional Crime Officer of Tesano, ASP Stephen Donyina Kyeremeh, said on Wednesday December 7, 2011, at about 5pm, the suspect met one of his victims at Alajo where she was about boarding a bus.
He confronted her with some prophesies of happenings in her life which she admitted were true.
The sexy prophet then continued that the lady needed prayers urgently so they had to return to her abode.

The lady aborted her errand and took the strange man to her house at Alajo. In the cause of the prayer, the self-styled prophet managed to convince his victim to have sex with him in order to exorcise some evil spirits which were presumably tormenting her life.

Shortly after satisfying his libido, this dialogue took place:

Prophet: Which of your possessions is very dear to your heart?
Lady: My digital camera and my laptop computer. They are gifts from a relation abroad.
Prophet: The items were possessed by some evil spirits before they were sent to you.
The camera and the laptop ought to be cleansed because according to the prophet, they were the remote causes of her problem, telling her to bring them.
His victim, like a lamb being taken to the slaughter slab, obediently brought the items and another prayer session began.

While the victim was busy praying, the suspect bolted with the computer and the laptop.
In the middle of the prayer, the woman opened her eyes and to her shock, she was alone.
After several hours of waiting, she gave up until a week later, Wednesday, December 14, when Ese called the woman on her phone.

The sexy prophet, who did not know that his plan had been uncovered, told his victim that he had seriously been working on exorcising the evil spirits from the two items but the spirits were so recalcitrant so he would need another bout of sex to speed up the process.
The victim, who had then become aware of the suspect’s intentions, informed the police who ambushed him. naijagists.com

At the appointed time, when Efe showed up, he was arrested and whisked to the Tesano Divisional Police Station where he admitted to the offence and handed over the camera and the laptop to the police.
A search through the camera showed nude photographs of several women suspected to be his victims.
ASP Kyeremeh said while the police was yet to charge him, a female caller who was later invited to the police station came to corroborate a similar event between her and the suspect.

The second victim told the police she had come to remit the suspect, adding that usually after their sex escapades and prayers, she remitted the sexy pastor for his effort in exorcising the so-called evil spirits which she was made to believe tormented her.

OMG Wonder shall never end in this great country of Nigeria.