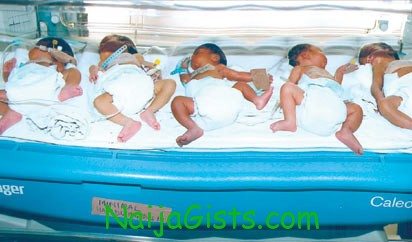 For most couples, the birth of a baby elicits joy. For some, the birth of twins or more elicits even greater joy and gratitude but when a woman is safely delivered of quadruplets (four babies) or quintuplets (five), her joy is supposed to be boundless.

Such is the case of Mr. Wale  Shofunlayo and his wife, Olayemi who were blessed with a healthy set of quintuplets weekend at the Lagos University Teaching Hospital, LUTH.

According to  Wale, the couple’s joy is immesureable as they did not prepare for five babies at a go. naijagists.com

Before the  babies came, the couple had prepared for quadruplets as the doctors’ investigation including comprehensive scan  showed that there were four babies.  But little did they know that posterity had another plan for them.  A gift, which could be described as the best Christmas gift anyone could get at a time like this.

Vanguard gathered that the middle aged woman who gave birth to two boys and three girls was said to have been in the hospital since last June  waiting for the arrival of the babies that finally came last week Friday.

Doctors at LUTH had recommended bed rest from the seventh month till delivery.

The delivery, which was taken by over 50 active medical personnel at the hospital all started like a fairy tale when the first, second, third and  fourth baby came and the leader of the medical team,  identified simply as Professor Ajayi discovered that there was still ‘something’  in the womb.

Apparently confused with the fact that all the while,  medical examinations continually show only four babies, the experts almost jumped to conclusion that what was left must be fibroid tissue.  But thanks to experience, that made them hesitant in terminating whatever may be there or seal up the opening without  further probe.

Further check thereafter showed that the fifth baby was actually on the way.  Each of the five babies weighed at least 1.5 kg while the biggest  weighed 1.8 kg.

Narrating her experience to Vanguard, Mrs. Olayemi whose joy knew no bounds described the delivery as a pleasurable experience and surprise package from God. naijagists.com

Olayemi who was still recuperating said, “I and my babies are fine. I was expecting four. After everything, I found out they were five”.

In a chat with Vanguard, father of the babies,  who declined comments on the possibility of an Assisted Reproductive treatment said “We have a 2 -year -old -boy already but to have the quintuplets is God’s doing. Our first baby was delivered at Lagoon hospital. I’m a Muslim and I give glory to Allah for this rare blessing. It is not every day one is blessed with five children at a go.

“We have heard of instances of two, three, or four babies at once, but this is the first time I would hear about five and I feel so elated to be the one to have this number. I feel great, I feel happy and I give all glory to Almighty God without him nothing can happen.

“We were actually expecting four babies according to the scan. The doctors said there were four but God showed Himself and added the fifth one. They are two boys and three girls, he said.”

Wale, who would not reveal whether or not he and his wife went through assisted reproduction, is optimistic about the future.

On his reaction when he was told that his wife had five babies, he said:”I planned to have many children and my prayer is to provide for them to the best of my ability. I am not just knowing my wife was pregnant with multiple babies, we had been told there were four babies like I said earlier, and my wife has been on bed rest in the last seven months. I know God is there for me and my family”.

The Ogun State born Wale who was full of gratitude to the medical personnel that attended to his wife at LUTH, said “I must specially thank Prof. Ajayi for his experience. An inexperience doctor would have sealed up the opening or terminate the last baby”

He described the quality of care given to the babies as excellent. “I give kudos to the nurses and doctors who attended to my wife and babies.   I am more than satisfied with their services.

Asked if he is financially comfortable with the development, Wale said’ “I will not say it is the duty of government to take care of my babies. I don’t have the intention of begging with this publication but if anyone feels like helping it will be welcome.

I don’t like going to people and being turned down.  Even as a Lawyer, we don’t advertise, I don’t see the reason why I should do that because of these babies.

“But being human no one can have it all, so any assistance is welcome but that is not to say we will go cap in hand begging for aid. I have a job I’ve been doing for 19 years and God has been faithful”, he added. In the views of the Public Relation Officer of LUTH, Mrs. Hope Nwalolo, the birth of the babies was not the first case of multiple birth recorded by the hospital.  According to her, the  delivery took less than 30 minutes as there were experienced medical professionals on ground.

What experts say about multiple births

Multiple births are a type of multiple birth in which the mothers give birth to two or more offspring from the same pregnancy. The occurrence and frequency, however, vary dramatically.

In the views of a fertility expert, Dr. Abayomi Ajayi of Nordica fertility Centre, Lagos and Asaba, “Factors such as maternal age, socio-environmental factors, increase in the use of contraceptives, the race of human population, increase in the spontaneous abortion rate, and seasonal variations are among the factors that could influence multiple birth including twinning (two babies), triplets (three babies) and quadruplets (four babies)

Assuming they are alive, Nigeria’s first known multiple birth babies (sextuplets) would be 103 years old today.  Historical and medical records show that the birth of the first set multiple babies in Nigeria dates back over 100 years ago to 1907 when an unnamed 19-year-old woman from the South East region was delivered of six babies in a row after a short labour.

Although it is not known what their male/female sex ratio was or how many of the babies eventually survived, the event, like that of the controversial multiple birth babies, elicited as much drama, and graphic insight as to just how demanding all multiple births can be.

A combination of factors including the widespread use of assisted reproductive techniques and advancing maternal age at conception is associated with this phenomenon. Records are scarce, but it is believed that a plateau in the prevalence.