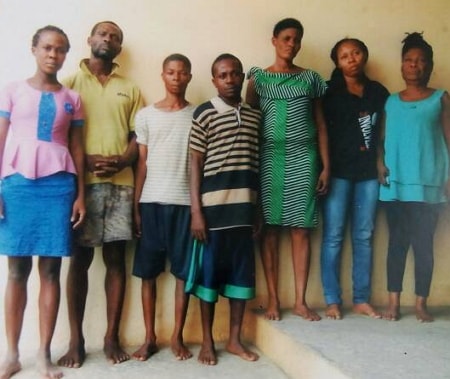 Some of the suspects

2 policemen and two students of the University of Uyo (UNIUYO) were among 17 suspects arraigned by the Akwa Ibom State Police Command for alleged cultism and gunrunning.

The suspects were arraigned at an Uyo High Court presided over by Justice Archibong Archibong.

They are facing charges of alleged involvement in cultism, illegal possession of firearms and others.

Police spokesman Odiko Macdon Ogbeche told The Nation in Uyo that 17 of the suspects, including two policemen, two students and a 29-year-old phone repairer at Ibom Plaza roundabout were among those prosecuted by the command.

It was gathered that while one of the policemen was attached to Ibom International Airport, the other was a security aide to a lawmaker.

The two students, it was learnt, are both in their second and third year as undergraduates.

The suspects admitted being members of the proscribed Ku Klux Klaans (KKK) Confraternity.

He adjourned the case till May 3 for further hearing and cross-examination.

They led the JTF to their hideout in a forest at Ikpe community in Etim Ekpo where others were nabbed.

The operatives killed 18 hoodlums, who attempted to escape.