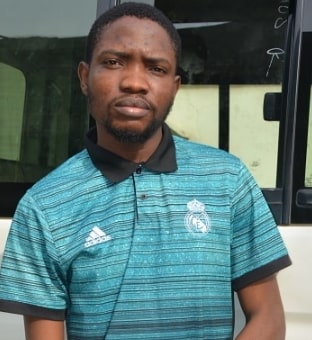 Photo: Romance Scammer Who Duped 2 Women He Met Online Of $1900 In Bitcoins Nabbed

Osaigbovo was alleged to have fraudulently obtained money from two Caucasian women, Ms. Helen and Kathy Jackson by posing online as William Robert, a Caucasian Engineer. He pretended to be in a love relationship with both women which made them trust him. He obtained the total sum of $1,900 in Bitcoins.

One of the counts reads: “That you, Idunwoyi Bright Osaigbovo, sometimes in 2018 in Abuja within the judicial division of the honourable court represented that you were WILLIAM ROBERT a male Caucasian Engineer with email; willirobbi56@gmail.com and obtained the sum of $700 from one Helen on two occasions from one Kathy Jackson in Bitcoin in the guise of being in a romantic relationship with her and hereby committed an offence under Section 322 of the Penal Code.”

He pleaded “guilty” to the charges.

In view of his plea, Justice Senchi convicted him and sentenced him to one month in prison with an option of fine of N25,000 as a first time offender.
He further ordered that the proceed of the crime should be forfeited to the Federal Government for onward refund to the victims.