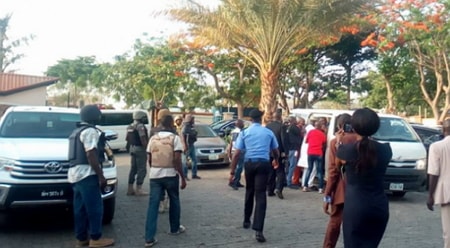 An officer who allegedly raped a woman at an Automated Teller Machine point at night in a bank in Awka, the Anambra State capital, has been arrested.

The state Commissioner of Police, Rabiu Ladodo, confirmed the arrest to our correspondent in a telephone call on Friday, adding that the suspect had been detained.

Ladodo said, “Soon after the police received a complaint of the alleged rape from the victim, operatives were dispatched and the suspect was quickly arrested and detained.”

He, however, said preliminary investigation had yet to establish a case of rape.

Ladodo said the matter had been transferred to the state’s Criminal Investigation and Intelligence Department for further investigation.

While promising that the outcome of the investigation would be made public, the police boss assured that the suspect would face necessary punishment if found culpable.

Our correspondent gathered that the policeman allegedly raped the 35-year-old woman at a commercial bank in Awka.

The victim, it was learnt, had gone to make some transactions at the ATM Wednesday night when the incident occurred.

It was gathered that the policeman, who was guarding the bank, had approached the woman, demanding to have sexual intercourse with her. She reportedly refused his advances, but the policeman allegedly raped her at gunpoint.

“The following day, the lady came to the bank with some policemen who arrested the suspect,” a source told our correspondent.