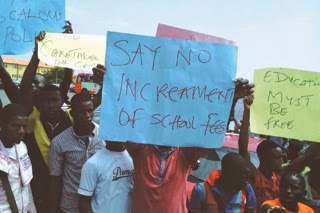 We have received an update on the ongoing riot at Tai Solarin University of Education in Ijebu Ode, Ogun state.

A student who witnessed the whole riot has narrated what happened at the school this morning.

“When we finished our paper yesterday, Edu 212- Philosophical Foundation in Education, we saw at least 200 students chanting protest songs. We ran for safety when we realized that the students were poised for a showdown with the school security officials. It was during the heated argument between them and the security men that many properties of the school were vandalised.

“All the louvres of Block A building, the Students’s Union Government’s building and the waterfall in front of the VC’s office were all destroyed by the aggrieved students. The situation made the management to invite the OP-MESA soldiers stationed at the campus – the student said.

NANS Chairman for Ogun State chapter, Comrade Okikiola Ogunshola blamed the school authorities for escalating the peaceful protest to a full blown riot when the OP MESA soldiers were called to the campus.

”We have been trying since yesterday to persuade the aggrieved students not to engage in violence. I want to confirm that no student was shot. The security men only shot into the air. We want the management to send these people away from the school. We don’t want them. They are not helping matters. I told the management that they should have engaged the State Security Service, SSS or even the police, rather than military men attached to OP-MESA. We are totally against this,” he stated.

The protest started when the school portal was closed down without allowing some students to pay their school fees, they were disallowed to take the examination.

As we speak, all the students on campus have been chased out by the soldiers.

Though some adamant students were reportedly beaten to death by the soldiers but NANS Chairman said nobody died.