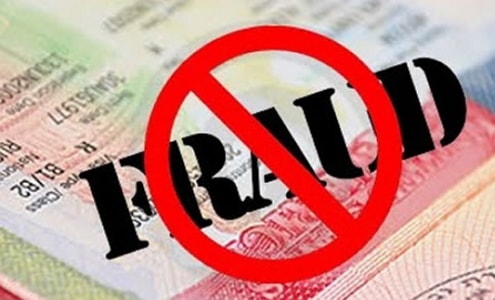 It was gathered that Flymate Nigeria Limited approached Gbadamosi to help secure admission to the University of Regina in Canada for the prospective students.

Our correspondent learnt that the 37-year-old travel consultant collected the sum of N1,050,000 from the company in order to facilitate the admission for the students.

It was learnt that Gbadamosi allegedly committed the offence at Abeke Animawun Street, Lekki area of Lagos between 2017 and this year.

Gbadamosi was arraigned before an Igbosere Magistrates’ Court on 15 counts of conspiracy, forgery, obtaining under false pretences and stealing.

The prosecutor, Inspector Francis Igbinosa, said, “Flymate Nigeria Limited last year approached the defendant to help with procuring admission for the students since it had so much work to do, and after an agreement with Gbadamosi, he was paid the said sum for the job, only for Flymate to discover from the students that the letters they got was fake.”

Gbadamosi, according to Igbinosa, on March 9, 2018, at about 10.30am, at the Lekki area forged and fraudulently issued a University of Regina Canada student admission letter number 019425660270 to one Chukwuemeka Idi.

He also issued the same letter to two siblings, Anayo Agu and Vitalis Agu, and a prospective female student, Mercy Akintunde, on February 21, 2018.

The prosecutor further stated that on January 26, 2018, the defendant also issued the fake Canadian admission letter to Raphael Offoelo, Michael Anaetoh, Oyekachi Isidore, Ojo Oladokun and Izuchukwu Axhodor, while on February 28, 2018, he issued same to Omoniyi Sowode and Akinpelu Akinwunmi.

He was further alleged to have issued the University of Regina, Canada student admission letter to Kehinde Pani on February 9, 2018; Oladimeji Apanisile on February 6; and Justin Nwadiaru on February 7, 2018.

The magistrate, M. O. Osinbajo, granted the defendant bail in the sum of N30,000, with two sureties in like sum.