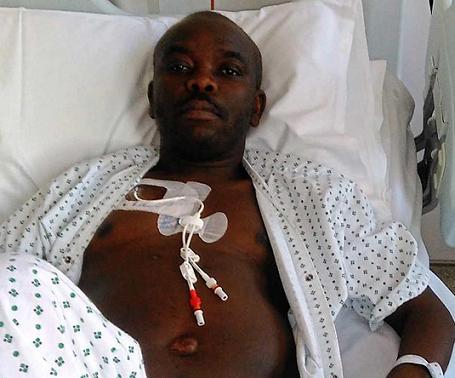 Isaac Aganozor, a caretaker a Dulwich College,  a public in London has launched a desperate appeal to the Home Office to allow his brother to visit the UK from Nigeria for a life-saving bone-marrow transplant.  Aganozor was diagnosed with leukaemia in August and needs an urgent stem cell transplant from his brother Patrick, who lives with his family in Nigeria.

Patrick, a tricycle courier who earns £2.30 a day, was refused a visa to enter the UK as he did not meet economic requirements. This was despite the £36,000-a-year school offering to sponsor his month-long “mercy mission” and pay £1,500 for his return flight.

His brother Isaac, 44, who lives in Sydenham Hill, is being given regular high-dose chemotherapy sessions at St Bartholomew’s hospital but has been told that “time is running out”.

A search of the national donor database revealed that Patrick, 38, is a 50 per cent match for his brother, and the only realistic hope of his receiving the stem cells in time. Despite a letter from hospital specialists detailing Patrick’s status as the “only available matching donor for the urgent stem cell transplant”, he was refused a visa in April.

A rejection letter from the British High Commission in Lagos, seen by the Standard, reads:

“You have stated your brother has acute myeloid leukaemia and you are to be a stem cell donor. I must take into account your personal socio-economic circumstances in Nigeria when reaching my decision. I note that you are a tricycle driver earning £69 a month in Nigeria but you state you have £1,500 for this trip.
“Given your limited economic circumstances in Nigeria I am not satisfied that these provide you with an incentive to leave the UK at the end of your stay as claimed.”
Mr Aganozor, who has been off sick from work since December, said there is no danger that his brother will try to stay in the UK after the transplant as he has to care for his four-year-old daughter and ailing mother in Lagos.He said:
“I was so happy when I found out that my brother was a match. But when his application was rejected it was a bigger shock than getting told I had leukaemia in the first place. The immigration officers didn’t consider my health, only economics. It is incredibly frustrating to know that the solution that could save my life is only six hours away by plane. I feel the sickness inside me, I don’t know what to do. My life is gradually slipping away.”
Simon Yiend, chief operating officer at Dulwich College, where Mr Aganozor has worked since April last year, said: “Isaac is a quietly spoken, hard-working man who gets on with his job incredibly well. I’m appalled by the Home Office’s decision.
“It is essentially because Patrick is a poor man that he can’t come across to do the only thing he wants to do — save his brother’s life.

“I understand the concerns around immigration and people who want to take advantage of our system, but Patrick wants to go back to his family in Nigeria straight after the operation.