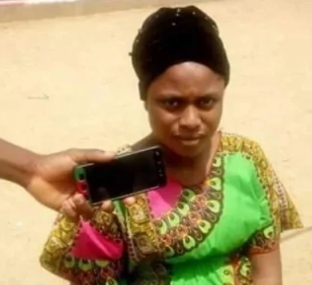 Princess Josephine Uloma, a 39-year UK deportee and native of Orlu in Imo State,  yesterday broke down in tears while giving her testimony at a church in Asaba Delta state.

The spinster, who said she was rejected by several suitors over inexplicable “spirit of limitations and anger” told the crowd of worshippers that for fifteen years she was infested with the “spirit of limitations, anger; demonic measures” that took her to a fake man of God where she was beaten up and flogged 48 strokes by the pastor in charge of the church.

“trouble started when I turned down a marriage offer from a suitor who hailed from Enugu State. Few months later, I found myself in an unbridled anger and querulous manners. I started beating up men whoever ask my hand in marriage. Any man who comes near me I will beat him up”.

In a fit of uncontrollable tears, Uloma, who was dressed in a French suit at the altar of the church, said:

“My life is full of testimonies, I rejected an offer of marriage from a suitor who hailed from Enugu State, and after few months, my trouble started, I was taken to several churches including one of the Pentecostal churches around Ezenei Avenue where I was flogged 48 strokes of cane by the pastor. And after I slept for twenty minutes, I took on the pastor, beat him up silly and forced him to eat from the sand”.

Speaking further, she explained that all she was doing within the period of the fifteen years were not immediately known to her until she was delivered by the prophet in charge of the church in Asaba.

Uloma, who denied that alcohol or Indian hemp was the cause of her problem, said:

“My parents during the process thought I did not want to marry. They organized a man who came from London to marry me, and when we got there I beat him up after a minor quarrel, and I was arrested and deported to Nigeria, I later realized I was not myself when I came into Nigeria before I was introduced to King’s Chapel”.

She stated that since her deliverance, she has had over 120 suitors asking her hands in marriage, adding that all the suitors are currently being screened by God.

Near Fatal Accident: 6 Unhurt As Ford Ranger Somersaulted 10 Times In Bayelsa
Hairdresser Being Oppressed By Landlord In Abule Egba Lagos Cries Out For Help