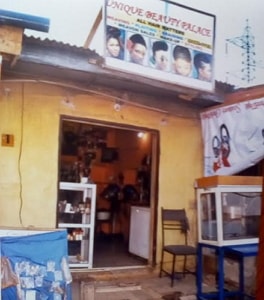 Human Rights activist Tayo Demola has taken over the case of a troubled hairdresser who is currently at the mercy of her oppressive landlord at Abule Egba area of Lagos.

Here is the cry of the nursing mother to well meaning Nigerians.

“I am a hairdresser at Santos Avenue, Abule-Egba, Lagos. Since last year 2017 my Landlord Mr Bernard Adekunle Santos has been threatening and harassing me at my shop. He conspired with one woman they call Iyalode who is his elder brother’s wife and they have been tormenting my life and business ever since then. They also conspired with one woman they call Iya Esther who is my neighbour and they cut off my electric wires last year and took the wires away and left me in darkness for many weeks last year.

Even when my Lawyer wrote them a letter to return my wires which they maliciously stole, they refused to return them. After stealing my wires, the Landlord now came and asked me to go and apologize to the person that stole my wires even when I never offended her, rather they were the ones that conspired to cut off and stole my electric wires out of jealousy.

The Iyalode is my Landlord’s brother’s wife and she is fond of always extorting money and goods from all the shops and stalls owners on that street because they own the shops. So she started hating me since last year when she came to my shop and wanted me to give her my weavon which costs over ten thousand Naira for free which I couldn’t afford to give out to her for free and that was how she started conspiring against me and spoiling my name to the Landlord as well as to people on the street.

This year when I wanted to pay my rent to the Landlord he refused to collect it and told me that he gave me one month to quit his shop despite I’m a yearly tenant and he never served me any official quit notice. The Iyalode told the Landlord that she has gotten someone who will pay a higher rent than I’m paying and that they should quit me. Since then he has been bringing thugs every time to threaten me in my shop. He has been threatening me that he will deal with me.

So on Wednesday 23rd May 2018 my Landlord Mr Bernard Adekunle Santos came to my shop in the afternoon and broke my shop, removed the door, stole my one hundred and seventy thousand naira and stole my goods worth over eight hundred thousand naira. This matter has been reported at the Area “G” Command, Ogba, Lagos. The police invited the Landlord Mr Bernard Santos and including Iyalode and Iya Esther to come to the station on 25th May 2018 but they refused to come to the station. On 24th May 2018 when we went with the police to serve them the invitation letter, the first son of the Iyalode by name Dare Santos was threatening to use charms to slap me and make me blind.

My life and the life of my 2-year old baby is currently in serious danger as they keep threatening to deal with me. As I write this my shop is currently without any door as they have removed the door and went away with the door. I have pictures and evidence of everything which I have attached. 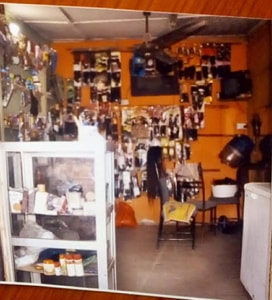 I’m not safe anymore. Please help. My life is in danger.***

Pls share this message until it gets to the Governor and the Commissioner of police.”