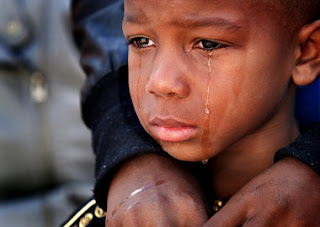 A woman who worked as a teacher in Abakaliki, Ebonyi state has killed her children in cold blood.

The woman named Uchaji murdered her own blood children in an unprovoked attack while they while sleeping at night.

According to her husband, the woman in her mid 30s allegedly slashed the throats of her 4-year-old daughter identified as Nneoma and her last born, a 2-year-old son named Godswill while they were sleeping at night on Wednesday 20th of February 2013.

The father of the deceased children, John Uchaji who is still in shock said he doesn’t understand why his wife could have killed her own blood children just like that without any sign of provocation.

Ebonyi Police PPRO added that Mr Uchaji, the dad of the slain kids came to the police station the midnight of the murder.

The body of the deceased children have been deposited into a mortuary for autopsy.

The police advised the family not to take laws into their hands, promising that the police would get to the root of the incident as investigation continues.

Lord have mercy! What could have caused this? This woman must be arrested on time to avoid further disaster who knows where she is heading to in Lagos.

May the soul of those innocent kids rest in peace.