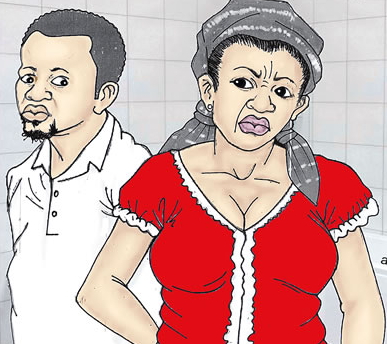 August 23, 2017 – Nigerian Woman Who Married Two Husbands In Ibadan To Satisfy Self Divorces One

A woman who married to two husbands in Ibadan has got the leave of a Customary Court to divorce one of the husbands.

Modinat Mufutau on Tuesday told an Idi-Ogungun Customary Court, Agodi in Ibadan, how she alternated two husbands to satisfy herself and get enough to take care of her three children.

She had begged the court to dissolve her 12-year-old relationship to one of her husbands, Ajadi Mufutau, for alleged lack of care and maltreatment.

She told the court she met Mufutau in 2005, and he impregnated her without marriage formalities.

The petitioner said that at the beginning of the relationship Mufutau pretended to be a nice and responsible man.

“But when he impregnated me, he began maltreating and beating me whenever I demanded money for antenatal care.

“I left his house after delivery and hooked up with another man, Saheed, who impregnated me two years later but turned me into a punching bag after delivery of my second child for him.

“Later, I settled down with Mufutau, got third pregnant for him, but Saheed, who I have second child for begged me to continue with him.

“I decided dating two of them without any problem until they met each other in my rented apartment and fought.

“My Lord, I have made up my mind to divorce Mufutau because he had stopped giving me money for maintenance of the two kids I had for him since he fought his rival, Saheed, in my apartment,” Modinat said.

Mufutau did not contest the petition for dissolution.

He said “Modinat is a shameless woman. I was not aware she still dates Saheed until I met him in the apartment I rented for her and she did not see anything bad in her action.

“I just pray the court to allow the first child be in my custody so that I can properly take care of the child and I promise to support her for the care of my second child,” Mufutau said.

The court awarded the custody of their first child to the respondent and the second to the petitioner.

Balogun ordered Mufutau to pay N3,500 as monthly allowance for the upkeep of the second child and warned both parties against fomenting trouble.