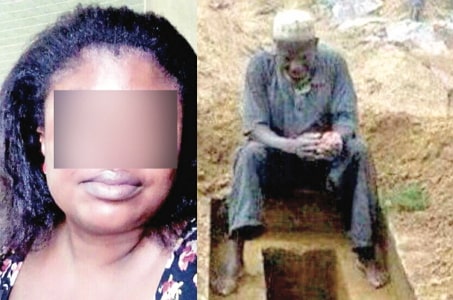 A man who lost his temper after learning that his wife is pregnant for his best friend has been arrested for threatening to bury his wife alive over the abominable act.

Caroline Mathew is 4-months pregnant for one Barnabas Ageleku, the bestie of her husband,  Agbadulu Mathew, an indigene of Yelwata in Nasarawa state.

Here is how Saturday Sun is reporting it:

He felt like killing himself. “Words cannot describe the agony of finding out, after 10 years of marriage, that my best friend had impregnated my wife,” he said with a tinge of bitterness in his voice. Then he looked at you, looked up and said: “I don’t blame Mr. Ageleku but my wife. I feel as if someone has ripped my heart out.”

He swallows hard before adding: “It is the cruelest betrayal in my entire life. My wife is a big disappointment and I can never forgive her. I feel utterly duped and cheated when she opened her mouth and told me and vowed not to abort it. My whole world has been turned upside down. The only way I can think of paying her back is to bury her alive, so that she will feel the pains of what she did before she will die.”

How the couple met and married
It is sad and unfortunate that their love life could suddenly turn that sour. According to him, he met his wife, 12 years ago, at the burial of the mother of one of his friend, one Thomas Agir, from Uvir in Guma Local Government Area of Benue State. “I still have flashes from that time, 12 years ago, when I walked into the wake for the burial, actually it was a celebration of life because the woman was about 74 years old before she died.

“Despite my efforts to appear calm on the outside, within me I was fighting butterflies when I saw her standing alone in a corner. She was an indescribable beauty, a woman in her prime, with beautiful hairdo and attractive clothes. She carried herself with some grace in her gait. I approached her and she responded well. I was happy that she considered me a savory character she could talk with. She told me who she was and with that I led her on in the conversation. We spoke at length and continued that relationship until we ended up as husband and wife two years later.”

The challenge of infertility
But soon the challenge of child-bearing stole in to begin to put a heavy strain on the bond of love between them. Agbadulu, 48, who holds secondary school certificate and who is into transport business said that his 10-year-old marriage went on well, though the fertility challenge was there. “We were finding ways of addressing it,” he told Saturday Sun. But somehow, along the line, his wife became impatient and decided to have sex romps with his best friend, Barnabas.

“I am fully aware that people were talking and asking questions. At a point, my family members were no longer comfortable with the way things were going: that we got married 10 since years without any child. But she lost patience and went into a deal with my friend,” he said with a whiff of frustration and anger.

The aggrieved man admits seeing the writing on the wall early enough but regrets not paying closer attention to it. “I suspected their closeness at a point and somebody raised the issue with me but I never believed my own wife can open her legs for my own friend. I equally did not believe my friend will ever contemplate doing such to me. Both of them have proved me wrong but my anger is with my wife. When she told me that she was pregnant, both of us knew that I was not responsible for it because we did not have sex for almost a year. I was worried that, at 48, I don’t have a child, the over-thinking about this made me to lose interest in sex. My wife was not patient and decided to have an affair with my friend. I am not always around and both of them had clear opportunities of meeting.

Justifying the decision to bury his wife alive
“I hated myself. I was stupid when my own wife summoned courage and told me to my face that she is pregnant for my friend. She has shamed me. She has ruined my life and I have decided to pay her back in almost the same way by burying her alive because I don’t want to see her anymore in my life. I don’t even want to beat her but to eliminate her completely from this world in that manner, that’s why I dug this grave to put her inside and cover her up.”

It is not as if he is unaware of the consequences of his planned action, in the eyes of the law, he said, but all the same, he is more than willing to do it because he cannot understand why his wife could have an affair with his friend, it is a big shame, he insists. He said that burying his wife alive is the only punishment that can assuage his hurt in the light of her betrayal, of what she did to him.

When our correspondent asked him how he thinks his in-laws would take the matter if he had his way, he said: “it is their own business. Their daughter disappointed me and I will also disappoint them. She is very lucky that I revealed my plans to her out of anger and she escaped.”

The wife’s own version of the story
When contacted, Caroline, his wife and the woman in the eye of the storm admitted prior knowledge of her husband’s plot through his slip of tongue. She told Saturday Sun that her husband had earlier threatened, in a fit of anger, to cut her into pieces and put her in a sack. “I thought he was joking until he went ahead and dug a 12-feet grave beside his late father’s grave,” she said. “My neighbours advised me to seek refuge elsewhere since my husband was bitter and wanted to revenge by burying me alive. He wanted to kill me because I had sex with another man and I am pregnant for him.”

Asked why she did that, why she chose to shame her husband in such a manner, she said with a trail of tears in her eyes: “I love my husband so much. He is my best friend as well as my lover. I made one mistake in the 10 years we have been together. I’m just not that kind of woman, it was almost like it wasn’t me doing it and I feel so guilty.”

She continued: “Before this incident, I was an outgoing, confident woman and living life without a care in the world, but when I was tired of answering questions about when I will start bearing children after almost 10 years, I started wearing my mask, my mask is my brave face, it is an invisible shield that I wear when I leave the comfort of my home.

“My husband and I have been trying for about nine years for a baby and if this baby isn’t his, it will destroy him. I know from day one that he will feel bad but I have no choice but to prepare his mind that the baby does not belong to him but to his close friend. For about 10 years now, he was not able to get me pregnant and I decided to test his friend who was equally worried and sold the idea of us having sex as a trial, more so now that my man was no longer interested in having sex with me. He always said there is no need again which means he has given up hope.”

In a way that put the blame of what happened partly on her husband, she said: “My husband has been denying me sex. He has not slept with me in the past one year. He always complained of tiredness as a way of avoiding me. Since I could not bear a child for him in the last nine years, my husband has refused to perform his duty. I almost thought of leaving him because I am human and he cannot starve me of sex for that long. That also contributed to my mistakenly falling in love with his friend. I have feelings too.”

Moreover, she added, age is no longer on her side. This is why she decided to go into test-running sexual escapade with his husband’s friend, to see whether the fault is from her husband who is not interested in treating his case in the hospital but relying on traditional medication. His wife who narrated her ordeal in the hands of her husband is at present taking refuge in her friend’s house somewhere in Lafia from where she hopes to proceed to her father’s house in Taraba State.

Though she regrets her actions she is not prepared to abort the pregnancy, she told our correspondent, because she is already 43-years-old and do not know when she would become pregnant again and give birth in her life. She added that she will deliver her child in her father’s house. Our correspondent’s effort to speak to her father using her phone yielded not much fruit as he continued to insist that he cannot say anything until he sees her daughter and hears her own side of the story.

All the same, he condemned vehemently the actions of both couple. “I don’t support the idea of having sex with your husband’s friend just because you are desperate for a child, and then have the gut to tell your husband about it,” he said. “Even at that, her husband over-reacted. His decision was not the best and I wouldn’t have allowed him to go scot-free. I am not saying my daughter is right. But his plans were too shocking if he had succeeded. That is all I can say for now but I thank God he did not succeed.”