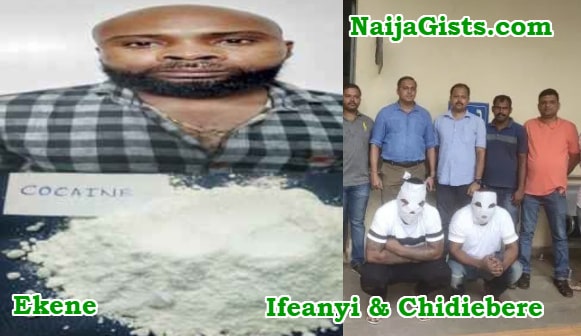 3 Nigerians have been caught in various parts of India for possession of hard drugs.

Two Nigerians were arrested in Siolim, Panaji, capital of Goa by the Anti-Narcotics Cell of Goa Police with 60.1 grams of cocaine and 15.3 grams of MDMA, together worth Rs 7.5 lakh or $2,000. The third Nigerian was picked up in Bangalore.

The accused arrested in Siolim were identified as Ifeanyi Obinna, 41 and Chidiebere Onuchukwu, 34.

The drugs were found in their rented room at Madlabhat, Siolim last week.

The ANC team led by PI Shitakant Nayak raided the rented room, based on information it had received, where they caught the duo with the narcotics.

Offences against the accused were registered under the NDPS Act and the duo were placed under arrest.

Goa is in south west India.

Another Nigerian, Ekene Okonkwo was also arrested by The City Crime Branch of Bengaluru, CCB for possession of cocaine weighing 20 gms.

Police arrested him following a tip off.

According to BangaloreMirror, the police conducted a raid on his house and seized the cocaine. Police said the accused had also violated visa regulations and overstayed in the city.

According to the police, he would roam around in the city to reach out to more people if released. He would also sell drugs only to customers known to him.