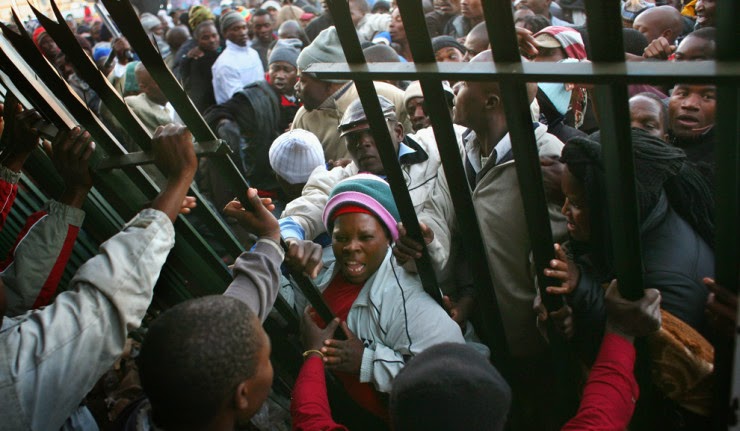 April 20, 2015 – Nigerians Living In South Africa Vow To Fight Back If Police Refuses To Stop Xenophobic Attacks On Them

Some Nigerians based in Mahatma Gandhi area of Durban South Africa have vowed to take up arms and defend themselves against heartless South Africans killing foreigners in the past 3 weeks.

In an exclusive chat with iol.co.za, 31-year-old Solomon Okoro said they have been receiving threatening messages but were alert and prepared for any trouble if police are not willing to protect them. He said they would have guns, knives and bottles ready. Okoro said they have no choice but to defend themselves if under attack.

“It is not like we do not know how to fight. It would not be a good thing because this is not our country, we are not here to fight. Also local people are our friends, we eat and
drink together. Those fighting are racist – they cannot live side by side with other Africans.

We (did) a lot for this country during apartheid. But now that everything is hunky dory we are being attacked… This smacks of hypocrisy,” he said.

Okoro is happily married to a Zulu wife and claims that if he had to go back to Nigeria, it would have a negative effect on his child. He disputed the accusation that the Nigerians living in the Point area were involved in crime.

“I come from the Igbo tribe. I am a king’s son and I came here with lots of money to set up a clothing shop. Most of us are businessmen who have contributed to the economy by employing locals in our hair salons and shops.

These are just greedy people who cannot stand our success… If these accusations are anything to go by, why not report those involved in crime to police? Not every foreigner is a drug dealer,” Okoro said.

Emmanuel Ike, 35, said his government had given South Africa an ultimatum to come up with a solution, otherwise they would close down all South African businesses.

“There are more than 240 SA businesses in my country and all of them come with their own staff, so to say we are taking your jobs is nonsense. We should be questioning why you are not employing our people back home.”

We are a hard working nation who do not look for handouts from the government. We work for ourselves,” Ike said.

Kumba Samou, 42, of Liberia said he had received a desperate call from his mother asking about his well-being.

“We are seeing what is happening on television. If you are not safe, please come home. I do not want you to die there,” she said.