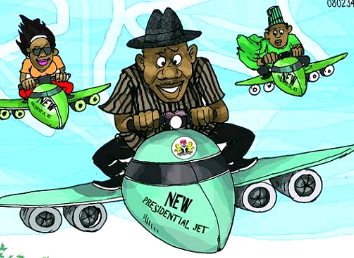 Like the proverbial hunter that became hunted, an armed robbery suspect has told how he narrowly escaped death in the hands of his victim. A four-armed robbery gang had invaded the premises of a powerful politician in Lagos.

The incident got to the attention of the state Commissioner of Police, Umar Manko who swiftly ordered the officer in charge of the State Anti-Robbery Squad (SARS) Abba Keyari to fish out the hoodlums. The efforts of the police paid off as they arrested the suspects. One of the suspects in an interview with Crimewatch denied using gun to attack the politician.

He said: “Really, we attacked the man but the man was too strong to defeat. We used pliers to break the kitchen window protector and gained entry. We started packing his laptop, phones and other things.” “As we were packing his things, the man woke up and grabbed me. He was too strong for me to handle, so he started beating me. He did not stop at hitting me, he also bit me.

His teeth were shaper than knife. He was biting me like a wounded lion. In fact, that man is a lion. He is too powerful. As he was hitting and biting me, I was shouting for help but my colleagues abandoned me. “How I managed to escape, I cannot tell. I was half dead.

When I left the house. If the man had beaten me more than he did, I would have died. He is too strong so, that is why I am saying no to the claim by the police that we were armed, if we had a gun, we would have fired him, rather we escaped from him.” Showing some wounds on his body, he said, “look at my body, all the injuries were from the man. He even injured me on my penis. He beat me black and blue.”

On who owned the locally made pistol the police claimed they recovered from him, he said: “I am not saying that I don’t have a gun at home, I have but I don’t use it for robbery. I only use it to protect myself at home. For that robbery, I swear to my ancestors, we did not use gun that day.” His suspected accomplice, Sheidu Busari, who the police named as the leader of the gang, corroborated Jimo’s story, “we did not use gun that day but my friend Jimo has a gun, but we did not go with it that fateful day. We only used big pliers to break through the window.

We gained entry but when the man grabbed Jimo, and he was shouting like a baby, I thought the man has stabbed him or had charmed him so I took to my heels. I did not know it was ordinary biting that was scaring Jimo. Jimo (Jamio) used to be strong that was why I was confused and scared when he was crying like a baby.”

Busari who was just released from the prisons for the same armed robbery, said “I was only sent to prison for buying a stolen phone but my elder brother later bought my freedom with N200,000.” On why he went back to crime he said, “don’t you know that Christmas is fast approaching. I need money for Christmas so, when we got information that the man we attacked was wealthy, I had no alternative than to go for the robbery.”

He regretted that the operation was not all that successful. “I swear, the robbery was a bad one. We did not make money, yet, it brought another trouble to me. See now, I will be spending the Christmas in the prison.” Lagos State police spokesperson, Ngozi Braide, said one locally-made pistol with six rounds of live cartridges, one HP Laptop, and one Nokia 200 were recovered from the suspects. (Article by Christopher Oji, DailySun Reporter)

Jokes aside, this reporter deserves an award.

19 thoughts on “Hilarious Confession Of An Armed Robber”