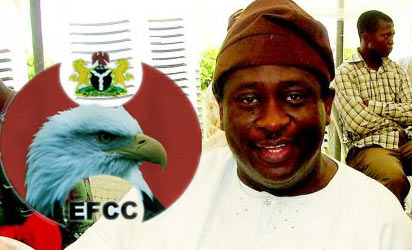 The Economic and Financial Crimes Commission (EFCC) has detained the Chairman of Bi-Courtney Limited, Dr. Wale Babalakin, since Tuesday evening in defiance of the order of a Federal High Court, which restrained the anti graft agency from going ahead with his arraignment and trial. Sources at the Lagos University Teaching Hospital (LUTH), Idi-Araba, Lagos disclosed that over 20 operatives of the agency, including armed mobile policemen besieged the hospital where the businessman had been on admission since last Wednesday, to arrest him, despite his precarious health.

They EFCC operatives were, however, prevented from carrying out their mission by the management of the hospital, which denied them access to the ward where Babalakin was admitted. The EFFC operatives, initially, resisted the hospital’s security staff and attempted to force their way into Babalakin’s ward, leading to a face-off that lasted till about 1am the following morning. After failing in their mission, the EFFC operatives resorted to physical and psychological harassment of Babalakin by stationing several policemen and plain clothes operatives at the entrance of his ward, consequently, restricting his movement, in clear contravention of the court ruling that directed the EFCC to stay all actions relating to the case it had against him, pending the determination of the suit before it.

Operatives of the agency, including uniformed policemen, were still cited at the entrance of the hospital’s private wing, where Babalakin was admitted, and its adjoining areas, yesterday evening. Bi-Courtney, in its reaction to the development, yesterday, condemned the action of the agency, describing it as a violation of Babalakin’s rights and an attempt to thwart justice.

The statement by the company’s spokesman, Dipo Kehinde, observed: “This is a new trend in judicial administration in Nigeria and it reflects desperation by EFCC to violate provisions of the law and constitution in order to circumvent justice, and a violation of the basic human rights of the citizen. “It is noteworthy that this brings back sad memories of the days of General Sani Abacha, when the rights of Nigerians were trampled upon with ease.”

The order of a Federal High Court, in Lagos, which restrained the EFCC from proceeding with Babalakin’s trial and arraignment, a copy of which was obtained by journalists, specifically stated: “Also perusing the amended statement, it is clear that serious issues of constitutionalism and the exercise of powers of public institutions and bodies have been raised. By the provisions of Order 34 Rule 6 (a) of the rules of this court, it appears to me that if the order sought is an order of prohibition and certiorari and leave is granted, the grant should operate as a stay of proceedings to which the appropriate application relates.

“Relief 1 is granted as prayed, an order is hereby made granting leave to the applicant herein to apply for an order of prohibition against the respondents and any other officers, agents, or security agencies of the Government of the Federation, including without limitation to the Nigeria Police Force or the State Security Service, acting by themselves, or through any of their officers, agents, privies or otherwise, howsoever, prohibiting them from proceeding with the arraignment or trial of the applicant further to Charge No. ID/239C/2012 pending at the Ikeja Division of the High Court of Lagos State, which was preferred by the respondents.”(Credit: DailySun)