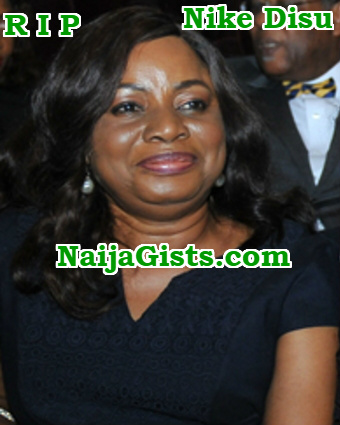 More shocking is the fact that Disu’s death occurred barely a month after that of her husband, who was reported to have slumped and died few weeks ago.

The ELITES exclusively gathered that Disu had battled Breast Cancer for many years. Sources disclosed that she braved the illness and had shown considerable signs of improvement this year. However, sources revealed her husband’s death might have taken a toll on her health, and she finally succumbed to the dreaded illness yesterday.

The ELITES gathered that Disu had been confronted by many tragedies in the last few years. Two years ago, precisely on 12 October, 2015, her brother-in-law, Mr. Tajudeen Disu, the Managing Director of the Lekki Free Trade Zone,‎ was shot dead during a clash between mobile police officers and youth of Okunraiye community.

Few months after, her father, Pa. Elkanah Olatunji Kobnah Williams died and was given a befitting burial in Lagos.

Disu was still smarting from this loss when her husband suddenly died.

Confirming her death, the members of Council, Management and Secretariat of the Chartered Institute of Taxation Of Nigeria issued an official statement, announcing the tragic incident. The statement reads thus; “We announce the unfortunate demise of a member of the Executive Committee of Council, Mrs Olanike Disu, FCTI, which occurred on September 4, 2017. She was the Chairman of the 2018 Annual Tax Committee (ATC). She was also an Assistant Director with the Federal Inland Revenue Service (FIRS) until her death. We pray that God will comfort her family and the CITN family, and grant them the fortitude to bear the irreparable loss’

Disu is survived by two children – Omoyeni and Ayomide, an aged mother, many siblings, among whom are Olatunde Williams and Ronke Adewale.

Notable among some of her friends are Yetunde Sebanjo, Rosa Vera-Cruz, Pat Faniran, Tolu Sadipe, Tunde Bank-Anthony and many others.

Continue Reading
You may also like...
Related Topics:dead, disu, olanike