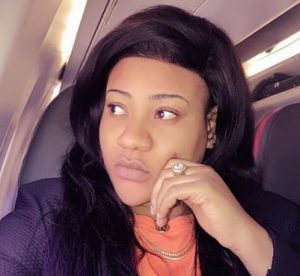 Curvy Nollywood actress Omoge Lekki (Real name Nkechi Blessing Sunday) who recently uploaded a video on her Instagram page in which she engaged in a steamy kissing session with an actor on the beach.

Many of her followers felt the kissing was too real to be an act, considering the fact that Blessing constantly moaned with pleasure and closed her eyes, obviously lost in passion.

When Sunday Scoop spoke with the actress, she insisted that it was just a movie set and she was only doing her job. Blessing stated, “There was nothing real about that scene. It was just an act and there were many people with us on that set.

When we watch American films, we appreciate them for how natural they act, but when it comes to our things, we criticise our actors for doing their jobs well. Acting is make-believe and we need to make our fans believe whatever we show them on screen.

The title of the movie is Bad Market and it was directed by Yomi Gold. I have no fears that people would criticise me for doing my job well. Since the beginning of my career, this is the first time that I would be locking lips with any actor. We cannot be faking things like this anymore. If we don’t play the role well, it is the same Africans that would bash us for not doing it as well as it is done in the western world.”

Despite how comfortable she appeared shooting the kissing scene, Blessing stated that she could not go nude on a movie set. “Kissing is the height of it for me and I think that is normal. I don’t see myself ever going nude in a movie,” she added.

The actress, who recently celebrated her birthday across several states in the US, also maintained that she solely funded her extravagant lifestyle. She said;

“I pay all my bills myself. I decided to give myself a treat for my birthday and that is why I visited different states to celebrate it. There was no big deal about it. I was with the people who loved me and I had a wonderful time.”