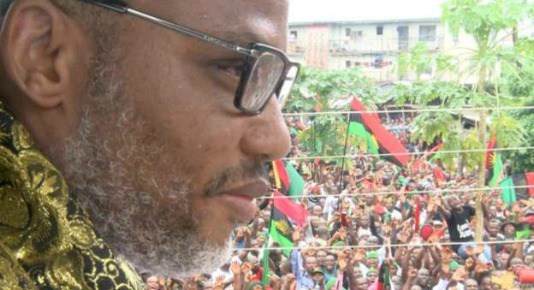 A pan Igbo group under the aegis of SE Renewal Group, SERG today blamed IPOB leader Kanu for the escalating crisis in the South East.

SERG President Charles Mbani in a press briefing in Abuja today called on Igbo leaders to do the needful to prevent the impending war.

He added that IPOB youths have been brainwashed to believe the Nigerian army as the enemy.

“You must have, like other Nigerians, watched recent events in Igboland with a sense of foreboding, concern and utmost dread. Images emerging from the southeast, our homeland, are as troubling as they are worrisome with the most recent being those of youths attacking military detachment with all manners of crude weapons including catapults, cudgels, machetes, sticks and others.

“These youths are being put up to this mischief after being brainwashed by the so called Indigenous People of Biafra, IPOB, which is now militarizing them as its fighting force.

“These misguided youths have been deceived into thinking they are making the right sacrifice of protecting Nnamdi Kanu, the IPOB leader whereas the only thing they sacrificing is their lives that they are throwing away on the altar of ignorance.

“The soldiers attacked by these uncouth elements are the ones taking part in Egwu Eke II (Operation Python Dance II), which we find most ridiculous considering that the same operation last year ensured that kidnappers and armed robbers that were desecrating our land were curtailed to a point where Igbos enjoyed peaceful 2016 Yuletide.

“We are therefore wondering if there is a nexus between IPOB and the crimes being eradicated by the military for its youths to become virulent on the scale being witnessed.

“May we emphasize that Igbo leaders of thought must tarry no further in doing the needful before it’s too late. The conspiracy of silence on the part of these leaders is what has made Nnamdi Kanu fill the resulting vacuum as a demagogic evil that is leading our youth population astray. This disposition of indifference was displayed as the hate speech championed by Kanu gained momentum until it got to a point where other ethnic groups in Nigeria basically developed a morbid collective disdain for the Igbo.”

“We urge other well-meaning elders of our land to join in condemning the incidents. The unnecessary attempt to provoke the military into using stick to address the Biafra issue would be catastrophic and those who love the region should do so well to warn their children from setting the region ablaze.

“The hate speech has now crystalized and is the bedrock of the aggression being exhibited against the military. It nothing urgent is done the next phase in this ugly evolution could threaten our existence as a people.

“We have interrogated the situation and discovered that the IPOB youths have been brainwashed into seeing the army as the enemy, which is most unfortunate since the person whom they think they are defending is their real enemy. Nnamdi Kanu holds dual citizenship and will escape to the United Kingdom once he has the opportunity to flee across the border. He is going to leave behind broken bodies and damaged youths that would have destroyed their lives in pursuit of what is meaningless relative to contemporary world reality.”