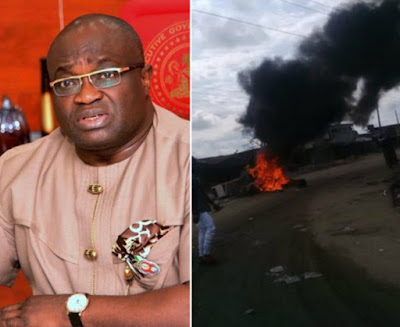 The governor of Abia State this evening announced extension of the curfew it imposed on Aba, the commercial nerve of the state.

In a release signed by Mr. Enyinnaya Appolos, the Chief Press Secretary to the Governor, Ikeazu extended the three days curfew imposed on Aba to Friday, 15th September 2017.

“The Governor wishes to advice residents and visitors to fully co-operate with security agents to ensure continuing maintenance of law and order within the commercial city and environs.

“He also wishes to express his displeasure with the situation where people are compelled to raise their hands while passing through security checkpoints and hereby call on security agents and all concerned to ensure that such acts, and other forms of inhumane and barbaric treatment of people, are discontinued immediately.

“It will be recalled that following security concerns and potential for breakdown of law and order, the Governor had announced the imposition of three days dusk to dawn (6pm to 6am) curfew at Aba from Tuesday 12/09/2017 to Thursday 14/09/2017.”

According to The Nation, many busy spots and roads were without its usual hustling and bustling and traffic jam associated with them as a result of the curfew.

Residents who were not able to catch up with public transport trekked home.

Some respondents who spoke to our reporter lamented the suffering and stress that have undergone within the days the curfew has lasted and appealed to the governor to consider relapsing the curfew.