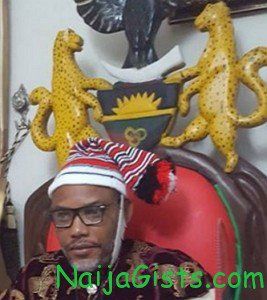 A Fededral High in Abuja has issued a bench warrant for the arrest of the Indigenous People of Biafra (IPOB) leader Nnamdi Kanu.

The court gave the order because the IPOB leader has failed to attend court since April 25, 2017, without any reasonable explanation.

In a ruling yesterday, Justice Binta Nyako, also directed that his trial on charges of treasonable felony should proceed in his absence.

Relying on the provision of Section 352(4) of the Administrative of Criminal Justice Act (ACJA) 2015, Justice Nyako agreed with the prosecution, led by Magaji Labaran, that Kanu has consistently failed to appear in court since April 25, 2017, without any reasonable explanation.

The judge, who rejected the objection by Kanu’s lawyer, Ifeanyi Ejiofor to Labaran’s oral application for the IPOB leader’s arrest, noted that she had, in an earlier judgment on a civil suit filed by Kanu, held that there was no nexus between the reported military invasion of Kanu’s community and his disappearance.

Justice Nyako noted that Kanu has violated the conditions and terms of the bail granted him.

She recalled that after the defendant was granted bail on April 17, 2017, the following proceedings of July 11, 2017 could not hold due the court’s vacation.

The judge further noted that on October 17, 2017, Kanu also failed to appear in court with his lawyer saying that the defendant absence from court was caused by the invasion of his home in Abia State by soldiers.

According to her, the three persons who guaranteed his bail, have applied to the court to withdraw their suretyship, because they could not account for his whereabouts.

Justice Nyako observed that on March 28, last year, 2018, Kanu’s trial was separated from that of his four other co-defendants in order to avoid delays of the other persons’ trial.

The judge recalled that, on November 14, last year, she ordered that the sureties should temporarily forfeit their N100 million bail bonds or produce Kanu in court.

She added that since when Kanu’s trial was separated from that of others, there were four court sessions that held and were adjourned without Kanu attending any.

The judge stressed that proceedings must end one way or the other, adding: “I have given the counsel for the defendant more than enough time to produce him in court.

“Therefore, by virtue of section of section 252(4) of the Administration of Criminal Justice Act, 2015, the only option open to do is to order that the trial will continue in his absence.

“Also in the absence of any reasonable explanation for his absence, I hereby revoke his bail and order that a bench warrant be issued for his arrest.”

The judge fixed June 18 for the commencement of trial with or without Kanu in court.

Justice Nyako, however, adjourned indefinitely, the proceedings in relation to Kanu’s sureties, who have applied to withdraw their suretyship.

The judge ordered the indefinite adjournment after lawyer to one of the sureties, Senator Enyinnaya Abaribe, Chukwuma-Machukwu Ume (SAN), informed the court that his client has appealed the November 14, 2018 ruling ordering the sureties to forfeit their bail bonds.

Continue Reading
You may also like...
Related Topics:arrest, nnamdi kanu

We Have Nothing, Our Hope Is In God – Widow Displaced By Boko Haram Cries Out
2 Pastors Kill Brother In Law For Stopping Them From Conducting Church Services In His House