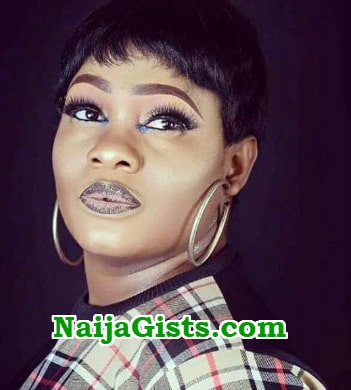 Most Nollywood Actresses Don’t Have Time To Build Love, They Pursue Wealth & Travel Around – Festina Peters

What was your journey into the world of acting like?

When I was a kid, I liked to dance and act drama locally. I always had dreams of becoming an actress and was consciously looking forward to becoming one. The first movie I saw was “Things Fall Apart” and “Ijele” that was when I followed my father to the city.

Fast rising Actor/Producer “Samuel Oniyitan” and his quest for excellence There and then, my passion of becoming an actress became stronger but unfortunately that was the period I lost my dad. I wanted to go to acting academy but I did not have funds for it, so I joined an acting group in Benin headed by a guy called Divine.

We did series of movies together in the year 2003 but there was no fund to produce them, Divine had to leave the group and travelled out for a greener pasture and promised to come back for us when he made it in life.

I also had opportunity to go to Europe, it came unexpectedly and I took the opportunity and travelled. I began to plan my life in Europe and pursue my dreams of becoming an actress. I was inspired by the likes of Genevieve, Omotola and the late Sam Loco Efe.

I started acting and producing movies in my local dialect. My first movie “Too Late” was officially premiered in Torino, Italy on November 22, 2015.

I had a lot of financial challenges, one thing is to have a dream, another thing is to actualize your dreams; it was not easy at all. I later made some money in Europe, I tried investing in movie production but I was not fortunate enough to meet the right people, I was duped and lost a lot of money.

I later came back to Nigeria in 2017, with the hope of finding a right person to assist in my production, I invested 2.4 million naira in a particular movie and I did not see my movie till date and nowhere to trace my money. I became so broke, I couldn’t break into the Nollywood industry so I restricted myself to my native language movies.

Can you tell us the films you have produced and featured?

I have done a lot of movies in my local dialect, I have made a name in Benin movies, the first movie I produced was “Too Late” and it is a wonderful movie. It is the story of my life highlighting my challenges.

My other movies are Aghatiti, My Mother’s Wedding, Little Joshua, Ekinadose and many more. I have also featured in “Not My Fault” , World of Sin, Emwinikpiahu, Household Enemy, Obodo Oyibo, Eshikito and a lot more. I can say that I have featured in more than 20 movies and if I include the movies I produced it will make it 30 movies in all.

So how would you quantify your investment as a producer and would you say investing in movie production has been lucrative and rewarding?

I must say that movie production is indeed a lucrative business if you know your way around the industry. It might be tough in the beginning just like every other business but trust me, it is rewarding.

I lost so much because I did not get the right people to work with, even at that, I am not giving up, I have learnt so much and have realized my mistakes. I will get there because I refuse to be defeated by my challenges. I will produce more movies in my dialect and I’m also working towards breaking into the Nollywood mainstream industry.

Are you married; If not, why?

I am not married, you have to be in a relationship before you can get married, so right now I am not in any relationship, I am still searching.

Is there something about you that scares men away?

I don’t know , I leave it to God, I can’t say if they are scared of something or not. A friend of mine once said that I look bossy but I am a very simple lady, I am free and playful, I accommodate friends, it’s just that I don’t joke with my work.

What kind of woman are you when in love and have you really loved someone romantically in the past and what was the experience like?

I can really love when I’m in love, I don’t really fall in love but when I finally find love, I love for real. I dated my secondary school sweetheart, his name was Osas, he was my first love, we had a misunderstanding and broke up, and this made me have wrong opinion about love.

I fell in love over and over again with Kelly and West but all didn’t work out well, I was left with a painful heart as they all left me the same way.

Why is it so hard for entertainers to find true love?

It is because people see actresses as prostitutes and tend to think they are hard to get.

Another thing is, entertainers don’t go for common men, they would rather go for guys who are famous and rich or whose father is famous.

It’s not that entertainers don’t find love, they just don’t have time to maintain and build love, they pursue wealth, they travel around and neglect their men.

Between being beautiful and sexy which one works for you?

Of course, I am beautiful and sexy, both works for me I must say. Some ladies think they are sexy because they have hips and bountiful physiques, or the way they dress, as for me I think your character, good looks and manner of approach put together will make you a sexy woman. The way you see things, your point of view could make people crown you “sexy”. I will say I am a sexy lady because I have great sense of humor.

Growing up was fun when my dad was alive, I was just a little girl of 12 when I lost him. When he died, life became so tough, at a point I had to stay at home for two years before getting into Secondary school, paying my fees was very difficult, instead of dropping out of school I resorted to doing some farm work and a sales girl in stores just to pay my school fees. I couldn’t afford university education so I went to a computer school.

When I was growing up with my siblings, we used to believe that our father was rich and had properties for us because we never lacked anything while growing up, but it broke our hearts when there was nothing to fall back on after he died. After some time I lost my elder brother and we had to take care of his kids. Seeing all these challenges, I became strong and determined to make it in life and help my family with it.

Continue Reading
You may also like...
Related Topics:festina peters biography