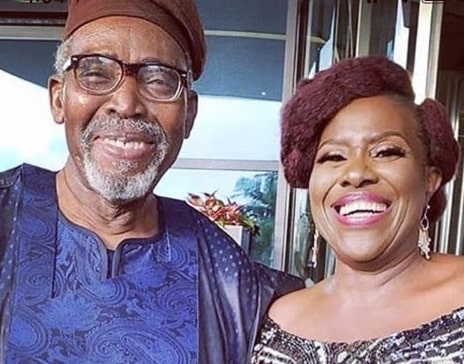 Here are some 12 Nollywood couples who are still happily married.

Popularly called Papi Luwe, a renowned comic actor Sunday Omobolanle and his wife, Peju Ogunmola, also an actress have been together for over 3 decades and still counting. Though, not many people are aware that Aluwe was a polygamist as actress Peju Ogunmola is the only known face among them. Aluwe’s first wife is the mother of Sunkanmi and she died a long time ago, precisely in the year 2006.

Unarguably Nollywood’s oldest power couple. The duo who are proud grandparents have spent over 30 years of their lives together as a married couple. Despite going through some rough times together, losing a child and more, they both remain strong and according to them, the fuel keeping their home is God, communication and trust.

Nollywood star actor, Odunlade Adekola is happily married to his sweetheart, Ruth. She is a committed Christ Apostolic Church member and the prayer warrior of the family. They have been married now over 15 years and are blessed with four boys.

Razak Olayiwola widely referred to as Ojopagogo by fans of Yoruba movies is married to Moji Afolayan, one of the daughters of late Ade Afolayan, Ade Love. The couple met on the job over a decade ago and has since been married.

One of Nollywood’s celebrity couples, the Youngs, have been married for over 15 years. They are proud parents of three beautiful kids. Despite several rumours, the couple has stood the test of time and is still going strong.

Nollywood diva and daughter of late Funmi Martins, Mide Martins, has been married to her beau, Afeez Abiodun Owo who is also an actor for over 13 years, and their union is blessed with two girls.

Nollywood sweetheart, Omotola has been married to her pilot hubby, Matthew Ekeinde for 20 blissful years and counting. The couple’s marriage is an enviable one and they have over the years managed to be scandal-free. They are blessed with four beautiful children.

Married for 19 years, Ace actor, Richard Mofe Damijo and former Africa Independent Television (AIT) presenter, Jumobi Adegbesan are still waxing strong and remain dedicated to their marriage despite rumours of infidelity. RMD married Jumobi in 2000, after the death of his first wife. They are proud parents of five children.

Married for over fifteen years and blessed with three handsome young men, the Obolis undoubtedly have an enviable relationship. They have successfully been able to balance their individual careers, work and family and are just an epitome of a perfect match. The couple who could pass for siblings are very much into each other that they do literally everything together.

Award-winning actor, Ramsey Nouah has been married to Emelia Philips-Nouah for over a decade and they are blessed with three kids.

Continue Reading
You may also like...
Related Topics:celebrity, couples, most, nollywood, successful