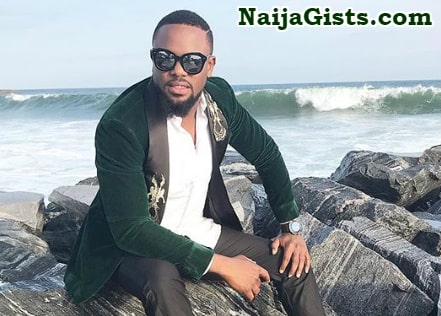 How do you balance acting and modeling?

I balance it well. It’s entertainment so I don’t have qualms. Many entertainers don’t just plant themselves in one area of entertainment. You can diversify. There’s acting, there is modelling, singing, comedy, event compering, TV show hosting and stuffs like. So, it’s just a matter of just identifying the areas in which you have interest in and I’m sure you can combine them quite well.

Which would you say is most lucrative?

Right now, it has to be acting because that is my major hustle in entertainment. I’m an actor. So, acting is this is the most lucrative for me.

If you look at where we are now and twenty years ago, there is a big improvement. We are doing quality movies now and you can’t be comparing us with Hollywood that has been there for several decades.

We are just starting. Come on! We are getting there. We are not there yet, it’s a gradual process and I’m very happy with the growth. And please, anything that anybody, individual or government can do to support and help us grow stronger and better, please, such support would be appreciated.

Which aspect of the industry do you think the practitioners need to improve on? It will be investment. A lot of moviemakers don’t have huge budget to put into a movie. So, easy access to fund is paramount. People have great ideas, very massive movie projects in their heads and the ideas are there but funding is the problem.

What’s your relationship status?There has been several rumours linking you in the past to romantic affairs with other celebrities.

Can you marry a co-celebrity? And who is your crush in the industry?

Can I marry a co-celebrity? Why not! I mean if the bond is there and the chemistry is there and if the two of you complement each other, then why not! My crush will always be Jennifer Lopez. Please, if you can get her for me, get her for me now and I marry her. Thanks (Laughs). How would you describe your love life? It has been interesting. It’s not the best and not the worst, but’ it’s been interesting.

Divorce is almost like a normal happening in Nollywood. What’s your view about this?

I don’t think anybody will go into marriage and expect to get a divorce, to the best of my knowledge. Anyway, I know that sometimes different things happen in marriages that we don’t pray for. But there are differences that can come out from nowhere and these differences might be irreconcilable.

Domestic violence is one of those irreconcilable differences. I don’t wish everybody divorce but if it gets to that point where domestic violence is involved, I actually don’t think any woman should still remain in marriage before she dies from abuse someday.

If your husband or wife assaults you, because it’s not only men that beat women these days, it’s could be the other way, I don’t mind saying you should get a divorce. I don’t wish any couple divorces but if it gets to that stage, then I think he/she can go ahead.

Nollywood, Hollywood & Bollywood Actors Who Died In 2019 And Cause Of Death
Eniola Badmus Compares Neck Sprain Pain To Near Death Experience