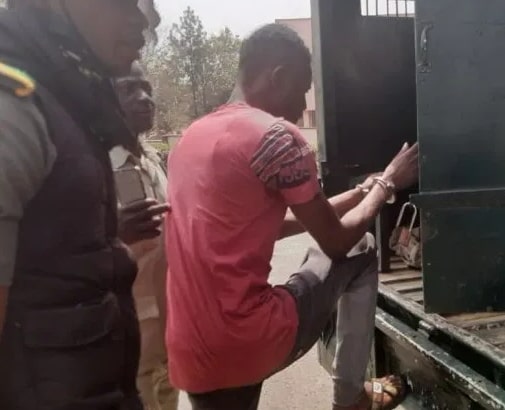 NOUN Student Arrested For Duping American Of $750 Gets N10Million Bail

The Ibadan zonal office of the EFCC yesterday arraigned an undergraduate, Ebenezer Tobiloba Okunlola, at a federal High Court, sitting in Osogbo, the Osun State capital.

The suspect, who claimed to be an undergraduate of the National Open University of Nigeria (NOUN), appeared before Justice Peter Odo Lifu charged with impersonation possession of scam documents and obtaining money by false pretences.

“That you Okunlola Tobiloba Ebenezer, “M” (a.k.a Ryan Antley) sometime in 2019, in Osogbo, Osun State within the jurisdiction of this Honourable Court with intent to defraud, obtained lTunes gift cards worth of $750 (Seven hundred and fifty United States of American Dollars) from one Kimmy Antley, an American citizen, when you falsely represented yourself that you are a white man with the name Ryan Dudely, the pretext you knew to be false.”

Based on his not-guilty plea, the Prosecution Counsel, Murtala Usman, prayed the court for a trial date and an order to remand the accused in correctional custody.

The defence counsel, M. O. Ademola, made an oral bail application, praying the court to admit his client to bail pending the determination of the charges filed against him.

Ihe presiding judge, Justice Lifu granted the prayer and granted the accused bail in the sum of N10 million and one surety in like sum.

The judge adjourned the case till February 6, 2020.