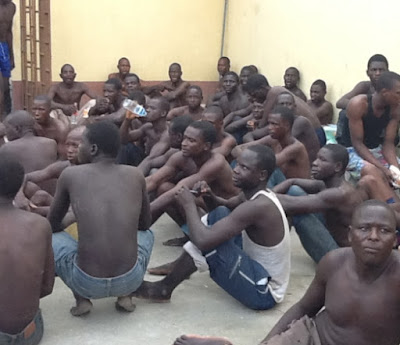 The Nigeria Prisons Service yesterday confirmed that 1, 639 inmates are awaiting execution in various prisons dotted across the country. According to the Public Relations Officer of Prisons, Mr. Francis Emorde, the last time the Service carried out execution was 2013.

He also explained that the reason behind the delay in execution was as a result of the state governors’ unwillingness to sign execution papers for the sheriff to carry out the order. He also confirmed that despite Friday’s Supreme Court ruling upholding the death sentence passed on Rev. Emeka Ezeugo, aka Rev. King, the governor of Lagos State, Akinwunmi Ambode, would still have to sign the necessary document for the execution to be carried out.

However, according to figures from the National Bureau of Statistics (NBS), Rev King has just joined the growing number of people waiting for their executions to be carried out on death row. NBS figures shows the 16 people were on death row 2007, 92 in 2008, 31 in 2009, 56 in 2010, and 72 in 2011, with the latest statement from the Prisons Service confirming that the figure has swelled to 1, 639.

Thus, with such a large number of people on death row and very few hangmen in the country, there are indications that Rev, King may stay much longer on Mother Earth, while waiting for his turn to face the executioner. Besides, the failure of many governors to sign death sentence is another possible reason for the delay.

The Criminal Procedure Act of each state provides that governors should affirm death sentences of condemned criminals before execution. Only four death row inmates were executed in 2013. And since then, no state governor has confirmed any death sentence. However, shortly after President Goodluck Jonathan urged state governors to sign death warrants for death row prisoners on June 16, 2013, four prisoners were executed, including Thankgod Ebhos, a father of three.

All four individuals reportedly still had appeals pending when executed, which is a violation of both Nigerian and international law. In 2013, the capital execution rate is 41,650,000 persons. In spite of human rights activists’ efforts to abolish the death penalty globally, it appears to be gaining more popularity in many countries. A report from Amnesty International shows that 1,925 death sentences were issued in 2013 and the figure rose to 2,466 in 2014.

The dramatic rise is due to the number of the death sentence issued by countries seeking to tackle crime, terrorism, and internal stability. In Nigeria, 659 death sentences were recorded in 2014, a jump of more than 500 compared with the 2013 figures – 141.

The surge in 2014 can be attributed to the mass death sentences passed on soldiers, who were convicted of mutiny in the context of the armed conflict with Boko Haram terrorists in the North, by military courts. Incidentally, Nigeria leads the chart with 659 death sentences, Egypt follows closely with 509 and Pakistan rounded off the top three lists with 231 inmates to be executed in 2014.

However, it appears that capital punishment has failed as a preventive measure against crime in Nigeria A statistical appraisal of crime rate in Nigeria by the Department of Statistics, Abia State Polytechnic, shows there has been a significant growth over the years and if not checked, it will keep rising