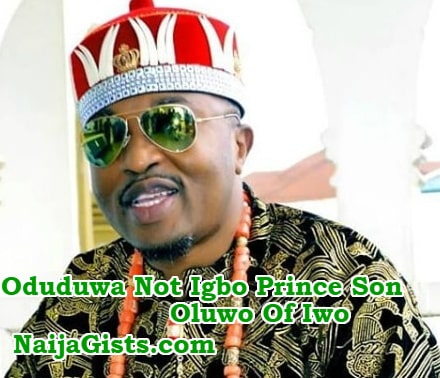 Nigerian monarch, Oluwo Of Iwoland, Oba Abdul-Rasheed Adewale Akanbi, Telu I, has debunked claims that Oduduwa, the progenitor of the Yoruba race, was the last born of an Igbo prince.

Reacting to Ohaneze Ndigbo counter claim to a statement by Ooni of Ife Oba Enitan Adeyeye Ogunwusi, Ojaja II that Igbo community originated from Ile-Ife, the Oluwo insisted the alleged claim by Ohaneze Ndigbo was not correct and misleading.

Ohaneze Ndigbo had claimed: “’Odudunwa’ (Last born), later called Oduduwa was an Igbo Prince, who occupied Ile-Ife but the Yoruba saw him as a god because he was very powerful and had magical powers.

“The Yorubas learnt and spoke Igbo language then and that is the reason for the similarity between Igbo and Yoruba language.”

But in a statement by his media aide, Ali Ibrahim, Akanbi described the claim as unfounded, false and misleading to “the stalwarts of history,”

The first class Yoruba traditional ruler advised the Igbo race to conduct further research on the adventure of their “own Oduduwa” instead of demeaning the status of the founder of the Yoruba race, “our own source and rallying point.”

The traditional ruler, who noted that record must be set straight and controversies be laid to rest, said: “Yoruba nation was founded by Oduduwa.

“Oduduwa brought the first civilisation which is the crown. Oduduwa demonstrated an unequalled, peculiar, unparalleled, unmatched, quintessential and different leadership.

“He served his people and became a rallying point for his services to humanity. He gave us the best tradition, so respectful and obedience. Rich, very beautiful and unblemished Yoruba culture emanated from Oduduwa.

“History is necessary and must always be objective because it is a foundation for the future.

“Worldwide, Yoruba land is the source of all natural crowns. Our crowns are spiritual, divinely-ordained and sacred.

“It was brought by Oduduwa. And we owe a duty to defend everything about him as our progenitor.

“The fact that “Odudunwa” means last born in Igbo language does not made anyone bearing similar name Igbo born.

“Ours was Oduduwa meaning “He came out black.” O-He, Dudu-black, Wa-Came, Oduduwa was an immortal symbol of merit.

“Oduduwa was never a subject to anybody in West Africa. Our own Oduduwa was one different from your own “Odudunwa” meaning last born.

“We have countless last born in Yoruba called “Abikeyin”. There may be many Odudunwa but there is only one Oduduwa.”

Explaining further, he queried: “Oduduwa was the source of all natural crowns worldwide. He has been in existence even before traditional governance was extended to the Igbos. How then can you be a prince to what you preceded?”

Oba Akanbi, who pleaded with Nigerians to focus on unity-based history and not discrediting one that may tear us apart as people, vowed to continually protect the rich heritage of the Yoruba race.