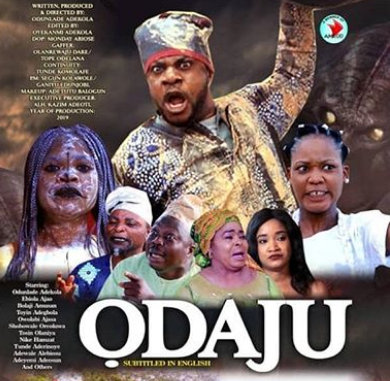 Ex BBNaija’s housemate Atteh Daniel Tioluwa aka Sir Dee, was spotted on set with Nollywood actor Odunlade Adekola, who is very popular for his comical roles in movies (especially in Yoruba movies).

BBNaija star (Sir Dee) was one of the housemates that people always loved, when it came to house tasks that required acting.

He always talked about considering a career in the Nigeria movie industry, and now, he has made his first Nollywood debut.

He is working on set alongside the veteran actor Odunlade Adekola, in a Yoruba film named “Odaju”.

On his Instagram handle @sirdee_da, he posted a video of both of them, and wrote:

“I hail you my big bros! Such a pleasure to meet and gist with you. You amaze me.”

“Watch out for #ODAJU guys! @odunomoadekola is bringing something awesome to your screens!”

“It’s my pleasure to meet one of the intelligent guys in the last big brother house. My handsome brother @sirdee_da.

But I don’t knw why @sirdee_da wanted to prostrate for me. Before he did, I quickly lie down.. J J J Don’t kill me I am still a small boy

YES WATCH OUT FOR #ODAJU ON THE 25TH ON YOUTUBE YOURUBAPLAY

Produced by your boy @odunomoadekola.

Following this, we all expect the reality star (Sir Dee), to grace our screens in the coming years.

The movie will be officially released on Yoruba Play YouTube Channel tomorrow Friday the 25th of October  2019.