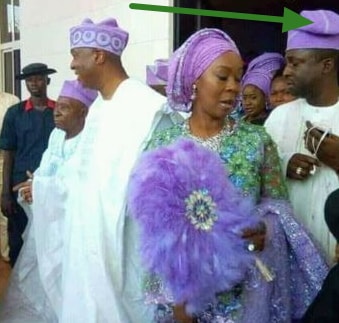 The NPF today said that investigations have shown that five suspects of the April 5 multiple bank robberies in Offa, Kwara State, attended the wedding ceremony of Senate President, Bukola Saraki.

The Force also said that investigations showed that three gang leaders who participated actively in the Offa bank robberies, Akinnibosun, Ibukunle Ogunleye aka Arrow and Adeola Abraham followed Dr. Saraki to Oloffa’s Palace when he paid a condolence visit to Offa after the robberies.

It displayed photographs which showed one of the suspects wearing an aseobi used during the embattled senator’s daughter’s wedding. 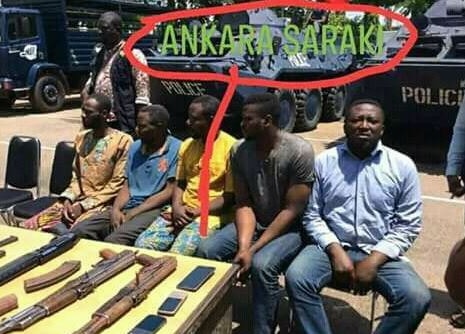 Force Public Relations Officer, Force Headquarters, ACP Jimoh Moshood, disclosed these while parading two new suspects out of the three persons named by the gang leader, Ayoade Akinnibosun a.k.a AY, in the Offa bank robberies in Abuja on Wednesday. He said one of the suspects was still at large.

He gave the names of the suspects as Alhaji Kehinde Gobiri aka Captain ‘47yrs’ and Alhaji Oba Shuaib Olododo aka Jawando ‘53yrs’ both native of Kwara state.

Moshood explained that the suspects had provided useful information to the Police about their connections to the embattled senator.

He told reporters that both suspects have admitted to committing crimes and criminalities for the senate president in Kwara Central Senatorial District under the guise of political thuggery.

He said: “The Nigeria Police Force has arrested two out of the three suspects mentioned by the overall gang leader of Offa Bank robbery. The two suspects are now in Police custody.

“They have admitted to various crimes and criminalities they have committed in Kwara Central Senatorial District under the guise of political thuggery for the Senate President, Sen. Bukola Saraki. They are currently under investigation and will be charged to court on completion of investigation.

“New revelations from further investigation into the matter show that all the five gang leaders namely; Akinnibosun, Ogunleye, Abraham, Salawudeen Azeez and Niyi Ogundiran have direct connection to the Senate President as new pictures of one of the five gang leaders when paraded by the police earlier in the week was in ‘Aso Ebi’ (trouser) used during the Senate President daughter’s wedding.”

“It was also discovered during further investigations that three gang leaders who participated actively in the Offa Bank robbery; (1) Ayoade Akinnibosun aka AY, (ii) Ibukunle Ogunleye aka Arrow and (iii) Adeola Abraham followed the Senate President, Sen. Bukola Saraki to Oloffa’s Palace when the Senate President paid a condolence visit to Offa after the bank robbery.”

Moshood also said the senate president was still under investigation in connection with the bank robberies.

The Force PRO said the police had not withdrawn its summon issued to Dr. Saraki, in regards to the bank robberies.

He insisted that investigators were still expecting the Senate President to report to the Force Force Intelligence Response Team office at Guzape, Abuja to explain his links to the five gang leaders involved in the robberies.

Moshood added that it was only the police that could issue a statement about the ongoing investigation, noting that Saraki was being expected for interrogation by the police.

He also said the Force would not be deterred in its investigation no matter the personality involved.

According to him, the confessions of the suspects under its custody showed that the senate president had a case to answer.

He said: “The invitation was never withdrawn, I read to you (journalists) that the Senate President was being invited to come and answer to the allegations levelled against him by the five gang leaders here. As I said earlier on, the Senate President, Sen. Bukola Saraki has a case to answer.

“The Nigeria Police Force will not be cowed or succumb to intimidation from any quarter in carrying out a thorough and discreet investigation into the Offa bank robberies where significant successes have been recorded.

“The ongoing investigation will be driven to a logical conclusion. Meanwhile, the Senate President, Sen. Bukola Saraki is still under investigation in connection to the robbery and the Nigeria Police Force will do everything possible within the ambit of the law to ensure that justice is done in this case.”

The gang leader, Akinnibosun in an interview explained that his gang members went with the Senate President to visit the Oloffa’s palace, but not on his invitation, adding that they heard about the visit through Saraki’s friend, Samshudeen Baca who invited them.

“I went with my Lexus SUV to pick them and we went to Offa and on getting there, not quite 10-15 minutes, the Senate President was done. When he was done with the Olofa, he said he was going to Ilorin, we followed him, when we got to a village, Eleyeoka, he stopped to ease himself, Senator Ibrahim Rafiu (Saraki’s friend) now gave us N50,000, he gave the money to me,” the suspect stated

When asked how he got the Aso-ebi (ceremony uniform) that was worn during Saraki’s daughter’s wedding, Abraham said it was provided by Akinnibosu, stressing that he had no direct relationship with the Senate President, insisting that he was just a mere political follower.

The suspect who was still wearing the Aso-ebi, could not provide the amount of money that was stolen during the robberies, adding that it had not been shared.

“After the operation, I asked Kunle about the money that was realized and Kunle asked Ayoade (Akinnibosun) who asked Adikwu who is the overall leader of the gang. He said we can’t share the money now because the police may use it to track us,” he stated.