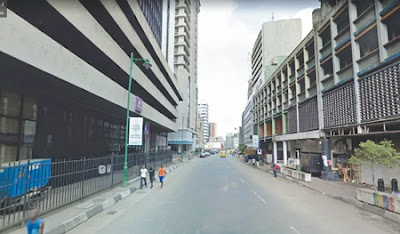 Residents of Offa, the second largest town in Kwara state where armed robbers gunned down at least 17 people last week during a daring raid on five commercial banks, said they are not ready yet to enter any bank building, no matter the benefits.

“Not even in the next six months, okan eeyyan o ni bale now” (one will still be afraid) was the way a senior staff of Federal Polytechnic, Offa put it to our reporter when asked about her readiness to resume visiting the banks if they should reopen soon. “Maybe with the presence of security agents now some people may have the confidence to go there but you know the memory is still there”, she said recalling that even before the latest incident during which nine policemen were killed along with eight civilians, she had been wary of using the banks due to the experience of many bank customers during the 2014 attack in the same town.

“Since the 2014 episode I have been wary of using banks in Offa, except when the matter requires that I must be present, maybe to append my signature to a document or something else and in doing so I try to leave as quickly as possible even the bankers know because they are always teasing me”. The fear, according to another respondent, Raliat Ajayi, has been further compounded by the release of a four-minute video footage of the CCTV recoding g of the robbery in one of the banks which has now gone viral. “Did you see how those guys blew up the banks; did you see the way they held their guns? How can I venture into any bank with that picture in my mind? Not in the next one year, I tell you,” she said.

In the CCTV recording, a security man and a man on white attire who were about entering the bank’s security post took to their heels after sighting two fully armed robbers firing shots at them from outside the bank premises. Next a woman wearing Hijab was seen holding a little girl scampering towards the main baking hall.

The armed men were seen dashing between the two points and sometimes carrying black bags. After blasting the two points, two of the robbers were seen moving cautiously with guns at the ready, towards the security post side which is thought to hold the ATM stand.

One of them was on red T-Shirt over blue jeans while the other was on blue T-shirt over blue jeans. Offa is not alone with the challenge of scared bank customers. Bankers too appeared scared. In Omu-Aran where robbers had equally killed three persons in a bloody attack in 2013, skeletal banking services, which began in January 2017, three years after, have also closed indefinitely, following the latest Offa incident. Sources within the community claimed that it took several efforts by indigenes of Omu- Aran in Lagos to convince the leadership of one of the banks to reopen.

The community later donated two Hilux vehicles to the Area Command in its domain, as demonstration of its commitment. A second bank, which had only few weeks ago completed the renovation of its office in the community and was billed to reopen to customers this week Monday, has also refused to open shop following the Offa attack.

The situation in Omu- Aran was the focus of concern expressed by a former Commissioner for Information in the state, Alhaji Raheem Adedoyin. On his facebook wall he wrote: “ I applaud Senate President Bukoka Saraki and Governor Abdulfatah Ahmed’s promise to facilitate/ provide Armoured personnel carriers (APCs) for Offa. But they should go further. “Kwara South, once bubbling with economic and commercial activities, has become desolate due to incessant violent bank robberies in Offa, Oro and Omuaran (the nerve centres of commercial and economic activities in the South.) “Banks in Oro remain sealed with no prospect of reopening. Two years ago, representives of banks in Oro visited Kabiyesi Oloro of Oro Kingdom, Oba Abdulrauf Ajiboye ,to discuss conditions for reopening. I attended the meeting at the Palace in Okerimi Oro. “

The following day, I accompanied Kabiyesi to Government House, Ilorin for a meeting btw Representatives of the banks, Kabiyesi and the special adviser to the Gov on Security. Two issues stuck out at that meeting: the need for a security trust fund (akin to the Lagos initiative) and procurement of Armoured Personnel Carriers. Now that Offa is getting APCs, Oro- and Omuaran- should be considered too.” Adedoyin’s position was also echoed during the week by Mr. Bisi Adeyemi, the President, Omu-Aran Development Association (ODA). While expressing the association’s readiness to partner security agents and other stakeholders toward ensuring a safe banking environment in the community, Adeyemi appealed to the Federal and State Government to consider the community in the deployment of some APCs to assist in protection of live and property in the area.

“As for me, I will resort to online banking, I cannot go and waste my life so cheaply”, a multimedia producer in Offa said during the week, adding, “even the banks themselves they can’t do much again, they will have to review their operation and start, maybe a system of daily collection because I’m sure many are not willing to enter any bank now”. Many communities surrounding Offa, Oro and Omuaran are severely affected by the development. In the last four years many have had to regularly travel to Ilorin, about 75 kilometres from Omuaran, to perfect bank transactions. In the process some have again lost their money to highway robbers or pickpockets in the city.

Others have resorted to using money transfer operators, and paying commission on their transactions. But the Olofa of Offa, Oba Muftau Gbadamosi assured residents during the week that banks will open their doors in Offa again within the next two months. Artisans were seen installing an ATM in one of the banks when our reporter visited on Thursday.

The promise by the royal father followed the arrival of reinforced security in the town along with a Armoured Personnel Carrier (APC). Oba Gbadamosi told members of the Offa Students Association, various groups of artisans and elders forum, who staged a mournful walk to his palace on Thursday that he had received assurance from managements of the commercial banks operating in the community. He also said promises were made by governments and their agencies, as well as support from people of the area to shore up security in the town, had also encouraged reopening as well as consoled him on the unfortunate incident. Kwara State Governor, Alhaji Abdulfatah Ahmed, has also promised to procure additional APC to beef up security in Offa and strategic locations across the state as he urged well-meaning citizens of the state to resist any attempt by anyone to use the Offa robbery attack for political purposes.